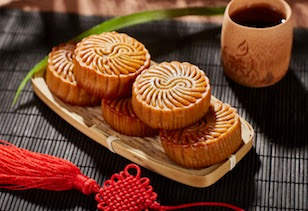 Festivals are an intrinsic part of Chinese culture.

Mostly based on the Chinese lunar calendar, these festivals are also a time for connection with friends and family, appreciation for people and place, and grounding in culture and traditional way of life.

With a number of Chinese festivals on the calendar for the coming months, below is a guide to 7 unique and exciting festivals to celebrate in China, brought to you by Pan Pacific Xiamen.

1. Celebrations and Sweets At The Lantern Festival

The wondrous Lantern Festival is an incredible light-filled experience with cultural performances for all ages.

Celebrated on the fifteenth day of the first month of each Lunar New Year (typically in January or February), it is a time for Chinese families to bond over a hearty meal.

Tuck into a warm bowl of famed Tangyuan (glutinous flour and bean paste balls in sweet broth) while gazing the full moon during the Lantern Festival (元宵节). The act of eating tangyuan signifies adding one year to your age while anticipating the coming spring.

Also known the last day of the Spring Festival, youths in ancient China were said to tour the streets freely on this occasion with lanterns. Their goal? To find a suitable life partner!

8 March is Women’s Day in China. An opportunity for men to express love and appreciation for the women in their lives, Women’s Day has evolved into a celebration of women’s purchasing power – clothes, shoes, and cosmetics are often discounted online.

The best thing about this occasion? Women can often leave work early and enjoy a half-day holiday!

More companies are taking a step further to honour their female employees by giving them a half-day off, catering breakfast in the office, or throwing them a dinner party.

3. Paying Tribute To A Patriot: The Dragon Boat Festival

Happening during the warm summer periods, the Dragon Boat Festival (also called Duanwu Festival) memorializes loyalty and filial piety every fifth day of the fifth Lunar month, which is in late May or early June. The date was made famous by well-loved minister and scholar Qu Yuan, who took his life in 278 BC after his political exile.

A senior political office holder, Qu was known for his loyalty to the state of Chu. Betrayed by his rivals to the detriment of his homeland, the distressed Qu drowned himself in the Miluo River after the fall of the state. Local villagers threw balls of rice wrapped in leaves into the river to prevent fish from eating Qu’s body as boatmen rowed out to find him.

To commemorate the occasion, glutinous rice dumplings wrapped in bamboo leaves (zongzi or 粽子) are eaten. The wrapped dumplings have become so popular that you can now buy them any time of the year in food stalls.

4. Fly Over The Milky Way On Qixi: Chinese Valentine’s Day

Known as the Qixi (七夕) Festival or Double Seventh Festival, Chinese Valentine’s Day falls on the seventh day of the seventh lunar month (usually in August).

Like Valentine’s Day in the West, Qixi Festival has its own touching tale. According to legend, a cowherd and a weaver girl (or Zhinü) were banished to different parts of the Milky Way. Allowed to meet once a year on the seventh day of the seventh lunar month, the couple would reunite by walking over a bridge of magpies in the sky.

In ancient China, Qixi was a time for single women to pray to Zhinü and burn paper offerings. Newlywed couples also paid their respects to the heavenly couple for the last time as a farewell to their singlehood.text

5. Feast on Sweet Mooncakes On The Mid-Autumn Festival

Celebrated across China and the Chinese diaspora, the Mid-Autumn Festival (中秋节) occurs when the moon is said to be at its fullest in the year. This is on the fifteenth day of the eighth lunar month, normally in September or October of the Gregorian calendar. Sweet round mooncakes representing reunion and connection are served during this occasion.

Head to your nearest Chinese mall or city plaza to join in the fun. Participate in lantern exhibitions, lantern riddle competitions, food fairs, and carnival games for the young and old.

The story of the mythical figure Chang’e (嫦娥)—an immortal woman living on the moon with a pet rabbit—is often retold during the Mid-Autumn Festival. Chang’e was famed for being the wife of archer Hou Yi, a hero who shot down nine of ten suns and saved humanity from disaster. Gifted a potion of immortality, Hou Yi let Chang’e safekeep it. To prevent a robbery attempt, however, Chang’e swallowed the potion and flew towards the moon where she is now said to live.

Get away from the city and inhale some fresh autumn air. Also known as the Chongyang Festival (重阳节) or the Double Ninth Festival, this day marks the impending arrival of winter and falls on the ninth day of the ninth lunar month, usually in October.

Chongyang is celebrated by baking and steaming Chongyang Cake. Made from rice flour, sugar, almonds and other nuts, the confection is a sweet treat not to be missed. Since the Chinese word for “cake” (糕) is a homonym for the word for “height” (高), celebrants often climb tall mountains and appreciate chrysanthemum blooms on this occasion.

Beyond working off your calories from the cake, hiking allows you to get in touch with nature, gather with your family and friends, and honor deceased relatives by burning paper clothing offerings at their graves. Declared as Seniors’ Day in 1989, Chongyang Festival is also time for numerous seniors’ nature walks organised by community associations.

7. Gawk At A Shopping Extravaganza: The Double 11th Shopping Festival

China’s answer to Black Friday is the annual Double 11th Festival (双十一), when people in China can grab a discount on Chinese online shopping platforms such as Taobao, Tmall, Amazon.cn, and more. This festival happens every 11th of November. Purely commercial in nature, November 11, 2016 saw Alibaba post a staggering 120.7 billion yuan worth of sales by the end of the day.

The symbolism of the four 1s has given the day the second meaning of being Singles’ Day (光棍节) in China. Celebrate your single status by tucking into a fried dough fritter (youtiao) breakfast, eaten on this day because it looks like the number one.

Celebrate China at the Pan Pacific on your next visit, and ask us about the best ways to rejoice in all of its seasons. Speak to our team at Pan Pacific Ningbo, Pan Pacific Suzhou, Pan Pacific Tianjin, Pan Pacific Xiamen, or Pan Pacific Beijing to enquire about our latest offers for rooms and suites.