VANUATU’S TOUCH OF CLASS – CHARGE IT! 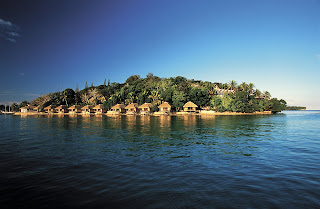 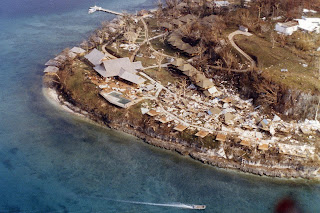 VANUATU'S TOUCH OF CLASS – CHARGE IT!

YOU can hear the gales of laughter now.

You've just told mates you're heading off to Vanuatu and a resort
that's promised you'll have the choice of seven restaurants and cafés,
five bars, a nightclub, three pools, a couple of tennis courts, a
private beach with a watersports centre, a gymnasium, a day spa, and a
secluded cove for dipping into coral viewing and snorkelling away from
the crowds.

And all within a kava's kick of some of the best duty-free shopping in
the South Pacific.

Pull the other one, the mates will tell you, this is Vanuatu… where
the main street through capital Port Vila is a wonderfully-titled
montage of potholes called The Walter Lini Highway, where until
recently 3-storeys was considered skyscraper stuff, and where
fast-food is looked upon as something that arrives at your table
within 30-minutes of ordering.

But now two of Port Vila's best resorts – one of them one of the
oldest, and the other one of its newest (although in true
island-tradition it took seven years from turning the first sod to a
guest turning the first key) – have decided to allow guests in each to
use all the facilities of the other.

And when they knock up any costs for meals, drinks, spa or other
services, all these guests have to do is say "Charge it," so that
those costs go back to their own room account.

The first, Iririki Island Resorts & Spa opened in Port Vila harbour in
the mid-1980s on a private island that had been the home of the
British Resident Commissioner in Vanuatu's pre-independence days, a
time when the country was called the New Hebrides and administered
jointly by the British and the French as a condominium.

To the locals, however, this resultant confusion of policies and
cultural clashes, was looked upon somewhat bemusedly as "The
Pandemonium."

And while Iririki's opening was to much fanfare as a sign of
confidence in the new nation, its foundation years weren't without
drama: within a year of opening, 1987's Cyclone Uma virtually wiped
the idyllic seventy-two bungalows and a dreamy restaurant and bar off
the map.

Our second resort directly opposite the re-born Iririki Island Resort,
and just 3-minutes away by ferry on the "mainland," is 6-storeys of
indulgence that was built by investors eight years ago, but stood
empty until bought by an Australian consortium last year; that
consortium then contracted the Mirvac group to manage it under its
prestigious Sebel banner.

And on the sixth floor the Hemisphere Lounge is arguably one of the
South Pacific's finest hideaways of unexpected indulgence, coupled
with stunning views for that very special occasion.

Across the bay amid Iririki Island Resort & Spa's lush tropical
gardens is Vila's premier Michener's Restaurant, named in honour of
the author who conceived Tales of the South Pacific when was based in
Vanuatu during the Pacific War. Here one indulges in spectacular
dining on fresh-caught fish, tender local beef and pork, market vegies
and the most wicked desserts in an adults-only environment.

And the laid-back little island can claim royal patronage: the Queen
and Prince Philip stayed there during their last South Pacific tour.

Virgin's Pacific Blue services (www.pacificblue.com.au) take just two
easy hours from Brisbane to Port Vila, and of course they've plenty of
domestic connections to get to Brisbane; to find out more about
staying at either of these premier Port Vila resorts and using the
facilities of the other, see travel agents.

PHOTO CAPTIONS: IRIRIKI Island as it was after Cyclone Uma roared
through Port Vila just

a year after the resort's opening.

AND as Iririki Island Resorts &
Spa is now, an idyllic haven of peace in Port