ON A CLEAR DAY… 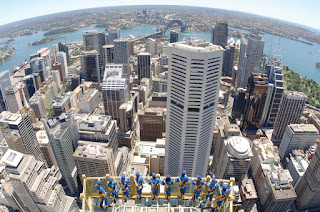 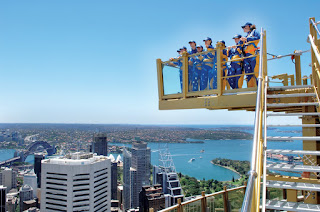 
HOW's that old song go: On a Clear Day You Can See Forever…

And on a clear day from one of Sydney's most-visited attractions, you can see forever.

And even if it's not a totally clear day, reach out and touch the clouds…

We've talking about Skywalk, an exhilarating 45-minute open-air stroll around the very rooftop of that golden dome atop Sydney Tower, and the highest public viewing point in Sydney.

While visitors have ooo'd and ahhh'd at the amazing unobstructed view from the glassed-in Observation Level at Sydney Tower for years, those fearless of heights can also go outside onto the roof of the tower to get an even better fresh-air view of Sydney and its sprawling surrounds.

Not that you just climb a ladder and stroll about: you're in fact tucked into a bright blue and gold Skysuit that fits over your street clothes (slacks for the ladies, please, and flat-heeled shoes for everyone) and then have a safety harness snapped over the Skysuit.

This harness is in turn clipped onto a track on a handrail that goes around two levels of the roof and follows an industrial-style metal walkway with a  further metre-high glass safety barrier.

So there's absolutely no chance of you falling off – and at one point if you wish, you can choose to stand on a section of reinforced glass flooring and look down between your feet to the cobweb of cables that hold the tower together, and the streets below them… something perhaps not for the feint-hearted.

The view from up here is 360-degrees, looking out to sea to watch cruise ships and maritime work-horses slipping into and out of the harbour, ferries and pleasure craft scurrying about the harbour itself, the Eastern Suburbs, down the coast to the Royal National Park, inland to cities like Hurstville, Chatswood, Parramatta, Bankstown, Ryde, and Hornsby, west to the Blue Mountains, and north past Pittwater to Norah Head in the far distance…

Guides accompanying each group of Skywalkers point out places of interest… historic areas with little word-pictures of their colourful pasts, interesting streets or buildings of historic or architectural importance, the Domain, Botanic Gardens, the Cricket Ground, Football Stadium, Mascot Airport with planes coming and going out in all directions like busy-bees…

And the rail network that snakes like some giant toy train set  through the city and suburbs… silver suburban trains fast-travelling here, long grey coal trains like-caterpillars there, mixed goods trains rumbling west, the Indian Pacific or other inter-State passenger trains heading off or completing long journeys to or from Adelaide, Melbourne, Brisbane, Canberra…

And equally fascinating is the roof-scape of the inner city: while most buildings are cluttered with drab air-conditioning plants and lift housings, amid it all are surprising patches of green artificial turf sporting barbecue set-ups and the odd sun-bather, tennis courts, even a few pools…

Skywalk cost $6m and remarkably the special walkways, railings and all other equipment were all made off-site by six different companies.

After they'd each done their own particular bit, everything was brought together and assembled at one site to ensure it would all fit… then taken apart again and broken down into pieces small enough to fit into the passenger lifts of Sydney Tower to get them to the top – where they were once more all re-assembled again.

And if you are a trivia buff, here are a few facts: It took forty-five workers two painstaking months to put the whole lot together on the roof of the Tower… in all 2086 pieces being either welded or bolted with 4,300 nuts and bolts like a massive Meccano set.

It is open daily (except Christmas Day) from 9.30am to 8pm. Tickets cost $65 for adults and $45 for children ten to fifteen… and you get a Certificate of Achievement to prove you've done it.

[] NOT for feint-hearts – Skywalks' overhang platform for those above the rest.

[] EXHILARATING view of Sydney from Bridge to beyond.