VANUATU POSTS ITS STAMP OF APPROVAL 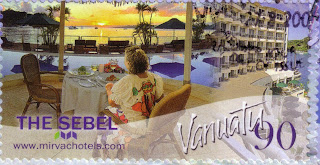 THE POSTAL authorities in Vanuatu are an inventive lot, and maybe amongst the world's most imaginary.

In an era in which many a little country makes a cosy income from selling colourful and odd-shaped postage stamps to collectors, Vanuatu goes one step further.

Five years ago its postal chiefs opened the world's first underwater Post Office, 3-metres down on the harbour-bed off Hideaway Island in a picturesque marine park outside the capital Port Vila.

In this tiny egg-shaped fibre-glass igloo the Postmaster, decked out in scuba gear, collects specially waterproofed postcards at his shopfront counter from tourists who duck-dive down to him; cards have to be written in pencil, and instead of an ink date stamp a novel embossed cancellation device is used.

Cards posted here are a must amongst philatelists, and following the raging success of the Underwater Post Office, Vanuatu went on to establish the world's first Volcano Post Box on the actual rim of an active, roaring and rumbling volcano.

It's on Mt Yasur on the island of Tanna in Vanuatu's south, and here a decision's taken each day on the exact location of the portable box, that decision being dependent on just how violent eruptions are at the time.

And now Vanuatu's postal bosses have come up with yet another way of using postage stamps to further promote the most important factor in keeping their country's economy afloat – tourism.

They've released a set of seven stamps (together with a first day cover,) that they hope will encourage thousands of international holidaymakers to visit their Pacific paradise, dubbing the set 'Resorts in Paradise'.

One is generic showing children frolicking on a pristine beach behind a close-up shot of a beautiful local orchid; the other six feature leading holiday resorts in and around Port Vila – Iririki Island, Le Meridien, Le Lagon, Breakas Beach, the Melanesian and the Sebel.

It's believed to be the first time in the world that private commercial enterprises have appeared on postage stamps, and tourism authorities are hoping the new stamps will have a similar effect in attracting visitors that the so-called 'Xtreme' Underwater and Volcano Post Offices had.

Iririki Island Resort has been part of the fabric of Port Vila for almost a quarter of a century and is situated on a pretty island in the centre of Port Vila Harbour.

A building at the highest point of the island was once the home of the British Resident Commissioner when the nation was known as New Hebrides, a condominium pre-Independence administered jointly by France and the United Kingdom; Queen Elizabeth stayed there during her South Pacific visit in 1974.

Directly opposite Iririki, on Port Vila's main street, is the newest Mecca for corporate visitors and holidaymakers, the Sebel. It is Vanuatu's first (and only) high-rise hotel and this year was venue for Tok Tok (Talk Talk,) Vanuatu's important annual tourism industry trade fair.

Two of the resorts featured on the stamps have gaming facilities.

One, Le Meridien five-minute from Port Vila city centre and set amid twenty-five lagoon-side hectares, has The Palms Casino with poker machines and a selection of gaming tables.

The other, the Melanesian Resort on the fringe of the city CBD, includes Club 21 that attracts players to its banks of poker machines.

Breakas Beach, aimed at adult guests, is located 10 or 12 minutes from Port Vila's centre on the Pango Peninsula; as well as an eye-catching infinity pool, it also boasts a 2km private beach on the Pacific Ocean.

Conversely Le Lagon, on picturesque Erakor Lagoon, aims itself squarely at families with deals at select times of the year that include all meals and unlimited house wine and local beer, spirits and soft drinks throughout the day.

And the resort's golf course has the world's only 'par one' hole: players have to drive directly down from a 6-metre high knoll into the 8th hole below to make par. Birdies and eagles are obviously impossible.

Golfers who've played it are convinced the designer must have had a good session on Vanuatu's famed relaxant, kava before drawing up the blueprint.

For information about holidaying in Vanuatu see travel agents, or check-out www.vanuatutourism.com

[] ONE of the stamps: first time in the world private commercial enterprises have featured on postage stamps.