PRAGUE GETS A BANG OUT OF NEW YEAR 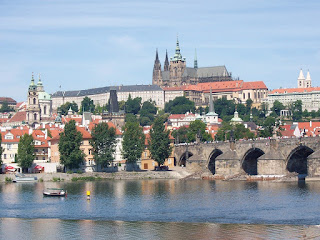 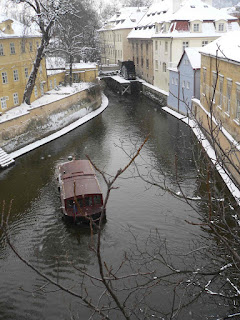 IT'S the snow that does it, bouncing the extraordinary New Year fireworks off Prague's white-capped buildings, parks and streets like some huge movie-lot reflector, so that the whole city seems ablaze in a double-dazzle of flashing white, electric blue, orange, red, purple, green and gold….

And under-foot it crunches icily as we sway with other boisterous revellers on the jam-packed Charles Bridge that links the Old Town of the Czech Republic capital with the approaches to the hillside Castle on the other side of the black Vltava River.

On the hill behind the palace, the official fireworks have just started. They're a bit late: pyromaniacs have been exploding their unofficial hauls for the past six hours in the streets, narrow alleys and squares willy-nilly, enveloping the city in a haze of gunpowder smoke.

And when the palace fireworks begin at midnight, it's a signal for our fellow bridge observers to reciprocate with extra fervour: out of coat pockets and backpacks emerge small skyrockets that are lit and launched out of the hand. Sparks shower nearby revellers; laughter and squeals of delight fill the air and we expect to hear screams of pain too, but they must be drowned out by all the fun.

In the darkness on the river a huge, unseen black barge launches its salvo that out-performs those from behind the castle, lighting up the snowy rooftops and parks and reflecting brilliantly in a myriad hues on the water.

Meanwhile, some Aussie friends who had earlier taken up a vantage point for the countdown below the Old Town Square's Astronomical Clock, are jammed shoulder-to-shoulder with rowdy New Year's celebrants fuelled with beer, gluhwein and absinthe, the locally-distilled high-octane rocket-fuel.

Their's is a more confined space for a localized fireworks display, surrounded by the 60-metre Old Town Hall and the square's four-storey buildings. It is happening too in Wenceslas Square, which despite its name is not a square but a wide street, and in which fireworks now erupt from the steps of the National Museum.

Chaos. Cheers. Hugs and kisses as the New Year breathes its first suffocating seconds amid the acrid smoke. Just as had happened or would happen in countless cities around the globe on the stroke of midnight on December 31…

In just 15 minutes it's over, but not for the crowds: they disperse to bars and restaurants … or to let off more unofficial fireworks for hours to come, leaving the coming dawn's work crews to clear up the scorched paper and cardboard firework wrappings that have stained the snow red, pink and brown.

And soon after dawn we stomp our way back across the 500-metres bridge named after Charles IV. It's already back to normal … hawkers, jazz and classical buskers entertaining scores of visitors just taking in the view up and down the river, and of the castle.

Promenading on the bridge is a favourite thing to do in ancient Prague, as is exploring the castle and its squares that date back to the 9th century.

We make our way through the charming baroque Mala Stala (Little Quarter) on the Royal Way route, discovering fascinating narrow laneways behind the main street and fall into a fabulous café for a thick, rich hot chocolate, European style.

And a Champagne starter to kick off the first day of the New Year.

At the castle, we're in time for the changing of the guard before losing ourselves in the royal courtyards, the gardens, St Vitus Cathedral, the Old Royal Palace, Basilica of St George and Dalibor Tower.

Unexpected is Zlata Ulicka, or Golden Lane, a cobbled alley along the northern wall of the castle populated by small colourful cottages once occupied by the castle guards in the 16th century, and later our Lonely Planet guidebook tells us, by royal goldsmiths.

It's not so easy finding a bed in Prague for New Year, but give Tempo Holidays a call on 1300 558 987 or try www.tempoholidays.com


[] NARROW canals and alleyways are a highlight of Old Prague