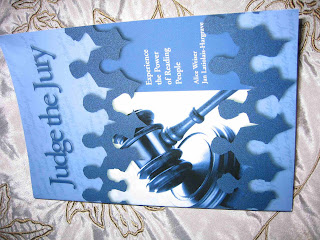 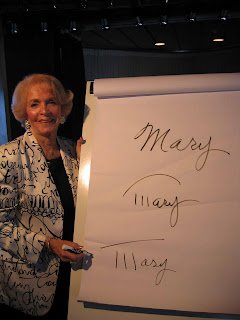 A 25-cent exercise book and a bit of teenage exuberance put Alice Weiser on the road to becoming America's Leading Lady of character and handwriting analysis, culminating in a life of cruising the world to share with fellow passengers the behind-the-scenes of some of America's most bizarre modern-day crime mysteries.

Scribble a few words on a piece of paper, doodle on a bar coaster or simply scratch your ear while you're talking, and within seconds Alice will be telling you everything you ever did – or more likely, did not – want to know about yourself. And with an accuracy bordering the scary.

Her skills have led her along the corridors of US law-enforcement agencies to assist on unusual cases, into the boardrooms of some of its biggest corporates to give advice on 'people profiling' for top-level appointments, and behind courtroom benches to help judges pondering whether an accused may have some hope of redemption with a second chance.

Just how folk cross their T's or dot their I's has seen Alice involved in analysing the Jon Benet Ramsey ransom note, the O.J. Simpson "suicide" note and the infamous Anthrax Letters… and explaining it all to radio and TV talk show audiences from America to Europe and Australia, including one particularly notorious crime that led to the making of the 1980s movie thriller Fatal Vision (that starred Karl Malden and Eva Marie Saint.)

Alice Weiser was born in Boston and enrolled early in college to study psychology, including handwriting whose analysis fascinated her with its ability to reveal so much in-depth information about an individual.

And at just under sixteen, when her father helped organise a local charity fair, Alice volunteered to man a handwriting analysis booth there.

"I bought a 25c exercise book and invited people to make a donation and write in my book 'This will not facilitate the matter,'" she recalled during a recent guest lecture series aboard cruise ship SeaDream I on its way to the Caribbean. "I told those who could spell 'facilitate' correctly that their intellect would take them to all heights – and those who couldn't, that their 'street-smart' would help them achieve their goals.

"They all went away happy – because I'd told them what they wanted to hear."

Today Alice says the letter 't' is the most important in studying handwriting. "The size it's written, which way it slopes or if its vertical, and how you cross it, tells us so much about you: if you are proud and dignified, independent, loyal, have willpower, can set your goals – or are just a procrastinator," she says.

And she recalled a case in which lawyers for a man facing jail for rape, asked her to analyse the written statement of the alleged victim. "Normal writing follows a rhythm, but as her statement went into the detail of the alleged offence, her words became erratically spaced – indicating she wasn't telling the story as it happened, but was creating it as she went along…"

The man was acquitted, and the girl subsequently admitted she'd lied.

How we act physically when fibbing is another of Alice's studies: "You blink more when you're lying, and often swallow more – and if you rub your nose while you're talking, you're really telling your listener 'What I'm saying actually stinks,'  while tugging at your ear is a dead giveaway for 'Don't believe a word I'm saying.'"

When a famous American surgeon was charged with murdering his pregnant wife and two children thirty years ago, a newspaper became curious about the angle a reporter on a local TV station began taking about the case. The paper got hold of samples of the TV reporter's handwriting and asked Alice to analyse them.

"Her writing indicated she was getting involved emotionally with the indicted surgeon… the whole event led to the movie Fatal Vision." (The reporter was taken off the case, and backed out of her relationship with the surgeon who is still in jail - Ed.)

Today the sprightly 75-year old Alice – once named International Handwriting Analyst of the Year –  cruises the world giving lectures and writing about her life and work. At last count she'd notched-up 127 such cruises.

And her final word?

"If you don't want anyone to know anything about you, never put anything in writing."

[] ALICE shows how three different signatures can tell all about you. (Top) clear, succinct and confident; (middle) a showman saying make way for me;

(bottom) lots of confidence, I know who I am and I have arrived.

[] HER popular book Judge The Jury is an easy-to-follow guide on how to read and profile people.