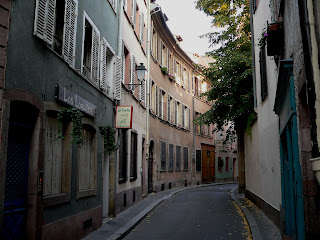 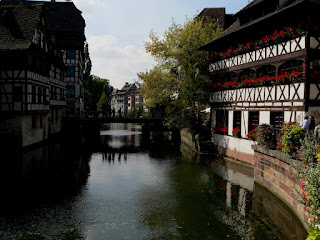 WE occasionally make decisions that in their wisdom surprise even ourselves.

One such was deciding earlier this year to stretch a day trip from Paris to Strasbourg to an overnight. A particularly long and enjoyable dinner with several bottles of French whites helped it along.

And had we not, we would never have discovered the "Old City" of Strasbourg, a place that dates back to 496 A.D.

So in the wee dawn hours of a Sunday morning, a normally ungodly hour for us, we cram in a quick walk through this old part of the city before getting the high-speed TGV train back to Paris.

The extraordinarily beautiful medieval architecture – almost eerie at this early hour with the streets wonderfully sans-people – literally takes our breath away.

Strasbourg is in the Alsace region of France, close to the German border and near where the River Ill joins the mighty Rhine. In ancient times it blossomed as a strategic commercial hub before two centuries of religious struggles hammered this role.

It recovered with its absorption into France in 1681, but along with the rest of Alsace was annexed by Germany from 1871 to the end of World War I and again from 1940 to 1944.

Today it is the seat of the Council of Europe, the European Court of Human Rights and the European Parliament.

The Old City occupies an island with its streets organised in a grid and with 20 bridges connecting it to the "mainland."

For the first 30-minutes of our early Sunday walk we sight not a soul as we wander past medieval houses, ancient shops crammed into narrow laneways and squares branching out from the city's Gothic Cathédrale de Notre-Dame that's built of fabulous pink sandstone.

We have the place to ourselves.

From the north side of the cathedral, we find the eighteenth-century Place Broglie, with the Hôtel de Ville, the bijou Opera House and some 18th century mansions.

And Number 4 Place Broglie where, in 1792, Rouget de l'Isle first sang what later became known as the Marseillaise after the mayor of Strasbourg challenged him to compose a rousing song for the troops of the Rhine army.

We're not Francophiles, but friends in Melbourne later tell us they had been brought up with the Marseillaise as the adopted tune of the AFL's defunct Fitzroy Lions (and now adapted by the Brisbane Lions.)  "We are the boys from Old Fitzroy" the Fitzroy faithful, we are told, still sing along Brunswick Street today.

But let's get back to Old Strasbourg. The previous afternoon, to the east of the cathedral, we had discovered trendy student cafés a-buzz with conversation and laughter, but this morning all is quiet, locked-up and it is beautifully peaceful.

We wander off west and discover the La Petite France sector, where the city's medieval millers, tanners and fishermen once lived.  Cute 16th and 17th century houses are decorated with elaborate carved woodwork and flowering window boxes; and further on, we discover ancient canals and bridges with watchtowers, built as part of fourteenth-century city fortifications.

It's easy walking because the Old City is flat – if you want an elevated view of Strasbourg and, in the distance the Vosges to the west and the Black Forest to the east, climb some 300 steps to a viewing platform within the cathedral.

Finally with the sun now coming up over the architectural horizon we amble back to our conveniently-located 3-star Hotel Beaucour – just across a bridge which bears rare and fascinating instillation art  –  as people start entering the cathedral to worship or to marvel at the 1842 Astrological Clock.

(If you can handle crowds, it's worth witnessing the clock's crowning performance at noon each day.)

It is 7.30am and the serenity is evaporating as the Old City starts another day.

We collect our bags and take the tram the few minutes to the city's rail station.

Then we're on the 0816 TGV train which, on its high-speed track, will have us  back into central Paris just after 10.30. We settle in and have breakfast on board.

It's a fitting end to a First Class morning; for information about Strasbourg check www.france-for-visitors.com and for rail services see www.railplus.com.au