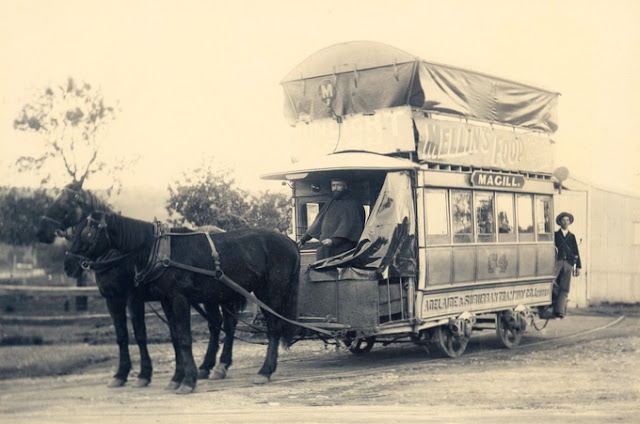 Before cars became so readily available public transport was the only viable option for people, unless they wanted to be on Shank's pony (ie, walk)

The Adelaide & Suburban Tramway Co initially began the line as a horse-drawn tramline before switching to electric on May 5, 1909.

History officer at Campbelltown Council Helen Thiselton said the fire which would've averaged around nine pence for an adult or five pence for a child, was the only affordable transport option for most residents

"It was the way the average person got around, Helen said. "Most people either had to ride horses or walk to get somewhere "Even when people had horses they were needed on the farm, so until public trams came along people were very limited in their transport options

"Back then you would hear about people walking from Magill to the city centre or from Athelstone all the way to Port Adelaide."

Collin Seymore, archives officer and former president at the Tramway Museum, said most of their trams would have worked the Magill line at some stage during their working life.

"The most common trams on the Magill line from the 1920s were the 'dropcentres' (202-284)," Collin said, "Dropcentres were very popular as they had lower centre steps and had wide doorways making loading and unloading easy."

Though revolutionary at the time, the trams eventually left the east as the maintenance and infrastructure costs became too high - particularly with the increase of cars and other alternative public transport options.

"The trams and infrastructure needed updating after heavy use during and immediately after World War II," Collin said.

"The tracks were often elevated in certain places so the tracks weren't always compatible with the road traffic," Helen said.

"As road traffic increased they became a bit of a hazard as the tracks weren't always level with the road.

"The authorities of the day decided that it was cheaper to have diesel buses," Collin added.