The Story of the Old Ghan Railway 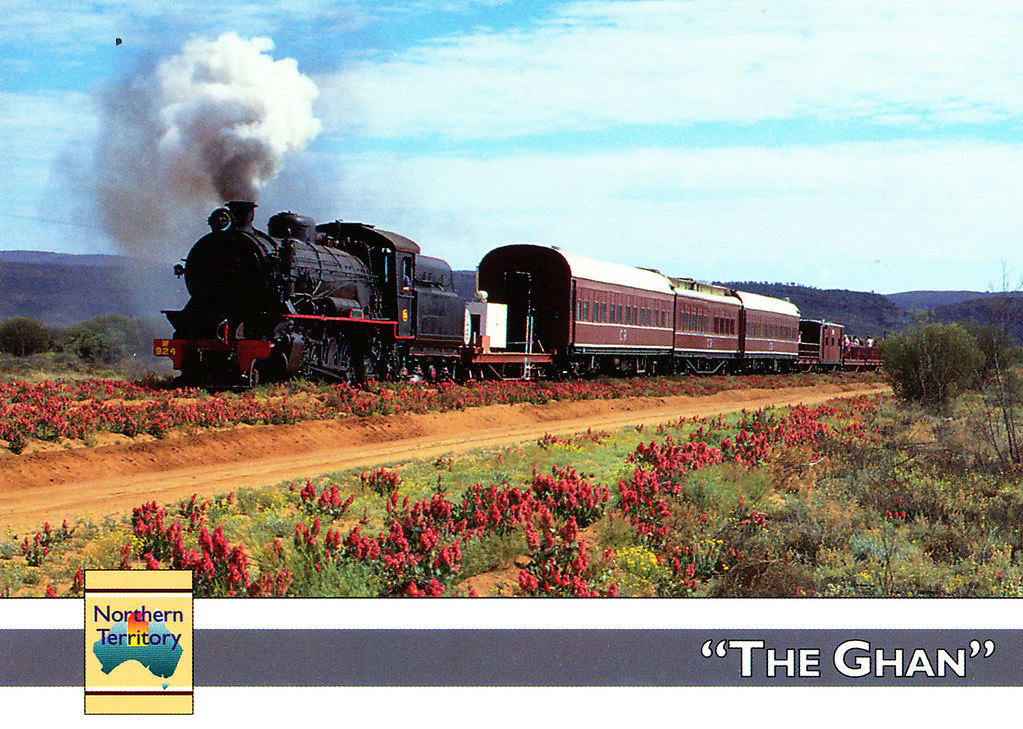 The Old Ghan story begins at Port Augusta, South Australia, in 1878 when, with picks and shovels, men began work on a narrow-gauge railway planned to snake its way to Darwin, and a link to Asia.

The railway grew in stages, shadowing the Overland Telegraph Route. Services to Quorn began in December 1879. It was a mammoth engineering project - not solely men's work. North of Beltana in 1881, women got work as navvies by dressing as men.

Ten years later the Great Northern Railway - as it was then known - ground to a halt at Oodnadatta for lack of money. It was another 38 years before trains finally wheezed into Alice Springs.

A Link with Civilisation

The impact the new railway had on the Australian interior was enormous. The line opened up the Outback, enabling pastoralists (such as the giant Anna Creek Station) to get their stock to market within days, instead of weeks or months. In the first 10 months of the extended line, 15,000 cattle were railed south for stock sales.

The railway brought development to Alice Springs and the beginnings of a tourist industry as travellers came to experience a Territory steeped in larger than life folklore. Most importantly, the railway provided 'Centralians' with a tangible link to the rest of the nation.

Early last century wizened Afghan cameleers led their *ships of the desert' to meet trains at Oodnadatta and Marree, ferrying passengers and goods to remote outposts. They were an exotic sight in Australia's Outback but a vital part of the transport scene.

In 1923 a railwayman at Quorn saw an Afghan passenger alight from the first Terowie-Oodnadatta train service, to pray in the station yard. He joked that the new train should be called the Afghan Express' if the worshipper was any indication of its passengers. The name stuck, being shortened by degrees to Ghan Express and The Ghan. When the line reached the Alice, the legend of this extraordinary train only grew.

Myths, Ghosts and the Inexplicable

The Old Ghan Railway crossed a land inhabited by indigenous peoples for 40,000 years or more. Many myths and stories were conceived in this ancient landscape. Local Aborigines near Lake Eyre believed a giant snake named Kuddimuckra lived in the ephemeral waters and so avoided travelling its shoreline. Not surprisingly, the approach of the first Ghan presented a fearsome 'beast' of unknown myth and they fled in terror.

With the arrival of Europeans came different beliefs, and new stories. At Kanyaka, it's claimed on calm evenings the lilting sound of a violin can be heard from one of the ruins. A young girl died in the early years of the town and was laid to rest in one of the cellars. Her spirit is said to provide the beautiful sounds.

At Algebuckina Siding, a guard who worked The Ghan for years was taking a train order from the Train Controller one night, when he felt a tap on the shoulder. Thinking it was his fireman, he brusquely told him to wait until he'd finished his papers. The guard felt another tap. Again he told the fireman to wait. Once again, the guard was pestered. When he turned around to admonish the insistent fireman, he was alone. The rattled guard found the only other living souls - the train's crew - busily tending their steam engine 200m away.

In the 1930s the Old Ghan Railway was a lightly laid line, snaking through sparsely populated country, lucky to see three trains a week. This changed dramatically with the outbreak of the Second World War and hostilities in the Pacific.

The railway line between Adelaide and Alice Springs became a key route in the war effort; and the Alice home for 5000 troops and a rail-head for military supplies for the north.

Civilians not required for the war effort were expelled. The Old Ghan Railway weathered a huge increase in traffic and the three trains a week rocketed to 56.

Derailments were frequent during the war as the light, un-ballasted track subsided under phenomenal loads. Engines were worked past their limits and splitting of trains, to conquer gradients, was common. Trains took three days to reach the Alice from Quorn but up to five to return, as northbound traffic had priority.

Times were tough. Men and machines were pushed to their limits. Yet the Old Ghan Railway triumphed through the sheer guts of those who worked the trains and peace was won in the Pacific.

The history of the Old Ghan Railway is peppered with moving tales of people who've faced heartache and tragedy.

Near Strangways Springs a lonely cemetery holds the remains of several railway workers, the victims of a typhoid fever outbreak. Coward Springs once boasted a small population and combined hotel/store. In 1962, however, the proprietor, who was living alone, was found dead on his premises. With his death came the departure of Coward Springs' last resident.

At Bundooma a fettler died just days after joining the track gang, the man a victim of summer's fierce century-plus heat. Yet he was far from an isolated casualty.

Floods, Drought and a Railway Spurned

In 1930 floodwaters tore apart the bridge pylons, severing the line. Marooned passengers and mails were rafted over the swollen river. Trains were cancelled for two months.

Rivers running bankers, line washaways and marooned passengers awaiting rescue were constant themes throughout the Old Ghan's history. Train delays were often measured in weeks, instead of hours. At Finke, the rail bridge over the river was on three occasions destroyed or badly damaged.

In January 1953, passengers were stranded for four days by Finke floodwaters, staving off boredom with singalongs and bush cricket. Finke's policeman brought goats' milk for six young train passengers and permission to sell kegs of beer (bound for Alice Springs) to the parched travellers.

In 1962 a new Finke bridge was completed. This too was destroyed by floodwaters in 1967. A further bridge was opened in 1969- but in January 1974, this again was badly damaged by floods.

Drifting sand was also a constant problem on the Old Ghan Railway at many locations. In the late 1930s, two sand scoop teams were worked almost continuously between Marree and Oodnadatta. Wind chutes, put up at several locations, provided effective solutions.

In 1952, it was decided a new standard gauge railway to Marree would be built, by-passing Quorn and the sharp curves and steep grades in Pichi Richi Pass.

On June 24, 1954, The Ghan left Quorn for Alice Springs with two new diesel locos at its head for the first time. At Alice Springs, Prime Minister Robert Menzies and most of the townspeople were there to greet the train's arrival.

The last Ghan train ran through Pichi Richi Pass in August 1956 and in 1957, Marree became a break of gauge station with the opening of the standard line to Port Augusta. The Old Ghan line survived, however, from Marree to the Alice for another 23 years. In the final months of the line, people journeyed from far and wide to savour one last trip on the Old Ghan Railway- one of the most memorable rail journeys of the world.