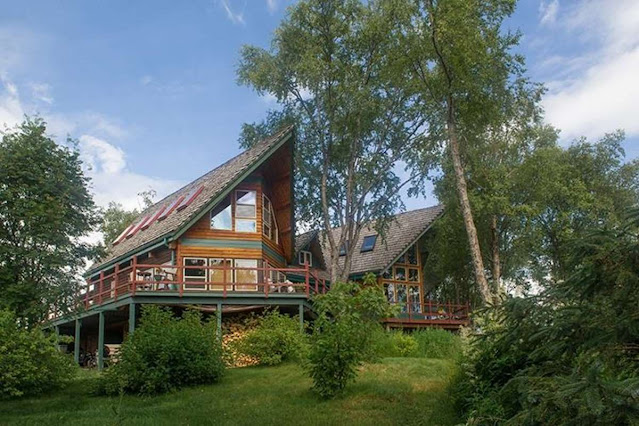 To begin with, Lucinda cooks like a professional chef-using organic produce, much of it from her garden and Kevin would be capable of building an entire Alaskan village with his own hands. This is Alaska as you imagine it. This was a trip rich in both flora and fauna: a unique and remarkable natural heritage, an exceptional environmental journey from start to finish.You set off from Anchorage to Homer, at the southern tip of the Kenai Peninsula, where you come face-to-face with nature, overwhelming in scale, with immense forests stretching as far as the eye can see. From Homer you catch a water taxi to Halibut Cove, at which point another vision greets your eyes, with endless blue lagoons below massive forests rising high into the sky. Halibut Cove is not a village, exactly. Certainly not a town. This is a place far away from the world, in the heart of nature, looking out over a lagoon stretching to infinity and surrounded by forest. My initial impression was an overwhelming sensation of authenticity, power, and mystery.

Kevin is from Maine, Lucinda from Oregon. Their passion for Alaska has endured for thirty-five years. Their eco-lodge is a haven for all those who hold environmentalism and taking care of nature dear. Protecting the environment here is a daily concern and a family affair. Lucinda looks after the house with her daughter-in-law, Jessica. Bowman, Jessica's husband, works with Kevin and organizes outings and hikes.

All of them are keen to help you discover the region, through hikes in Kachemak Bay State Park and visits to glaciers and their oyster farm (set up in cooperation with the Alaska Department of Environmental Conservation), a splendid initiative in perfect harmony with the ecosystem.

The morning starts early, with a walk. The world seems to lie at your feet, and think of you Jack London discovering Alaska when it was a land of hermits, trappers, and prospectors. A young man of 21, he went there to look for gold, following the great stampede of men who set off in the desperate hope of a lucky strike. The experience was to prompt his first published story, "To the Man on the Trail," for which the Overland Monthly paid him five dollars. You think of London's exploration of nature and the wild, and of the formative influence that this experience was to have on his life. You imagine him scaling snowbound mountain passes, scrambling down from one lake to the next, negotiating rapids and living in log cabins and miners' camps. Tourists would be able to reach the same destination by train, without even dirtying their shoes. But by then the Klondike Gold Rush was over. In the spring of 1899 London set eyes on the "dark spruce forest [that] frowned on either side of the frozen waterway" (as he later described it in White Fang), just as you discover it today. As you paddle in kayaks toward the glaciers, where the blue of the sky merges with the blue of the snow, you feel the same immensity of light and that space he described in both The Sea-Wolf and White Fang: "the wide-stretching sea breaking before us to the skyline," and the beauty of "the savage, frozen-hearted Northland Wild."

There were four of us on the trek through Kachemak Bay State Park. Suddenly the dense forests parted, opening up to reveal the immense bay spread out before us. A brown bear wandered through the undergrowth and disappeared into the forest. Soon we reached some majestic mountains, their lower slopes covered with a mattress of thick vegetation. I thought of all those who live in cities as I gazed silently over this world that teemed with more life than any metropolis. Everything here celebrates the preservation and protection of nature, and the passion of those who fight for our world and our environment.