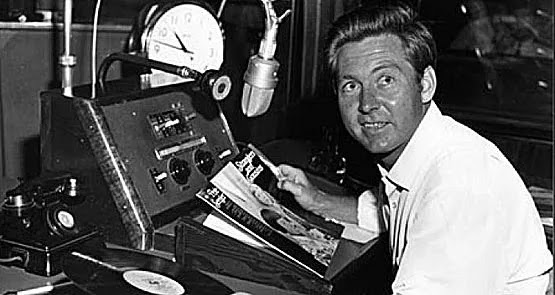 "My romantic ambition," confessed Bill "was to be a paddleboat skipper or professional fisherman-any sort of life on the river would have suited me fine. But it was a bit hard to organise . . ."

River banks no longer bound Bill Peach's world; satellites flash TV images to him faster than the paddlewheels threshed in his boyhood. And yet he is still sunny and wholesome: the quintessence of "country." "My father was a stock and station agent until he retired this year and I had a typical happy country childhood."

Bill Peach, who is thirty-three, has won admirers all over Australia as compere of the Australian Broadcasting Commission's TV public affairs programme, This Day Tonight. He has come a long way from the Riverina. "I lived at Lockhart," he said. "There were about 1,100 people-we had a fibro cottage with big verandahs and lots of fruit trees. I used to spend a lot of time swimming, catching yabbies, and stuff like that.

"It's a funny area-half Victoria and half New South Wales. You had a great conflict between Aussie Rules and Rugby League. It's very hot, dry country, with tremendous dust storms. Special dusty red soil, it is there-I remember us having the lights on during the day while it was black with dust storms outside, and sweeping out about a foot of fine, powdery dust later.

"It was pretty tough in those days they had these old furphies, we called them, coming around with water. An iron tank pulled along by a horse; you bought it by the bucket. I remember Mum staggering with buckets to try to keep the vegetables or the lawn going. It was a hell of a job."

Bill, one of two sons, won a scholarship at the age of eleven from Lockhart convent to St. Stanis- laus, Bathurst. After the University of Sydney (Master of Arts), he taught at high schools while defining his future.

"Strange," he said. "I applied for about thirty or forty jobs -market research, advertising- anything that looked reasonable. I didn't know what I wanted to do except get out of teaching. About ten answered, including the A.B.C. I had seen an advertisement for vacancies for specialist trainees in the Talks Department. That was the first time I'd thought of working for the A.B.C." He joined in Sydney in 1958, and gained A.B.C. radio experience in Sydney, Melbourne and Canberra before the A.B.C. seconded him as assistant to the B.B.C. representative in Sydney. He married and spent nearly three years with the B.B.C. in London and New York.

"We had great fun," he said. "We lived in Hampstead, which was beaut, and went through. the usual struggle of trying to decide whether to stay or come back-you know, whether to have kids bred up in this system of ours or not. Then my mother and my wife's father died, and we eventually decided to come back via New York."
Bill joined Sydney's commercial TV Channel Ten as compere of a public affairs programme, Telescope, and jumped from that to the A.B.C.'s Four Corners, and from Four Corners to T.D.T. in 1967, Ratings are high-especially in the country and T.D.T. continues to win respect for its bold (and quick) comment on controversial events in a nation still learning to express itself freely.
Bill is the first to disclaim assumptions that he is T.D.T. when the programme is the complex daily child of expert producers and journalists like Gerry Stone, Ken Chown, the late Frank Bennett and other members of the T.D.T. team. But he is the pleasant image, the healthy wit, the genial intelligence who visits thousands of homes each evening (with his briefcase), while Shirley and daughter, Meredith, three, and baby son Steven wait patiently at their house in Sydney's Mosman.
"People are much more ready to discuss issues now than when we started and prepared to discuss them on television," he said. "You'll get individual protests on something which may be very loud and prolonged, but mass public reaction seems to have died away. You ought to get a more informed populace out of the sort of thing we're doing, and I think that, to some degree, this is happening. We try never to duck an issue if it's something that obviously demands discussion- the programme would lose its value if we pulled our horns in for base reasons, and I don't think we ever have.

"That doesn't mean, of course, that there aren't periods when we run out of lively material, and think: 'For God's sake, I can't find anything very challenging in this lot.' But that's just the way it happens..."

He has a smooth approach but is not a once-over-lightly man ("It's very satisfying to mount a big programme on a big event, like LBJ's resignation speech by satellite, or the assassination of Robert Kennedy. It's most unsatisfying when you feel you've picked something up and dropped it without going anywhere").

He has entered an arena of conflict much wider than the old Aussie Rules v. Rugby League rivalry in Lockhart, but he also blends in a weekly A.B.C. radio programme he conducts on pop music ("Well, generally pop, but I like to make it a real mix-up"). He is interested in the personal approach TV documentary ("Things like the Muggeridge personal essay these are great") but he doesn't spare much thought for the future. T.D.T. was coming up; he crushed his city cigar and came up with a country image.

"You don't get much time to think ahead when you're busy riding a galloping horse."