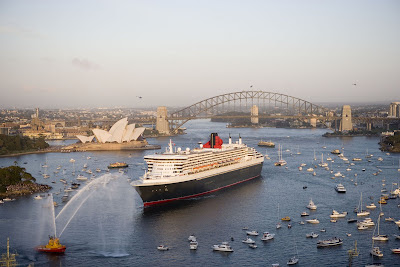 No matter how many grand and opulent cruise liners grace the world’s oceans, none can compare with Cunard’s royal family. The mighty matriarchs of the seas will always hold a premium allure among true lovers of ocean travel.

Cunard’s illustrious heritage can be traced back to 1838 when Canadian Samuel Cunard’s British and North American Royal Mail Steam Packet Company successfully bid for the transatlantic mail contract. Their first vessel, the 648 gross ton coastal paddle steamer SS Unicorn, made the crossing in 14 days at an average speed of 8 knots. Today, the relatively leisurely crossing is six days, although in the late 1930s, Cunard’s original Queen Mary could cross in either direction in less than four at a staggering 30 knots.

It is this transatlantic passage that defines a true ocean liner. Built specifically to complete this demanding passage in all conditions, a true ocean liner must meet many rigid design requirements not asked of mere cruise vessels. RMS (Royal Mail Ship) liners are in a league of their own.

Currently the Queen Mary 2, which entered service in 2004, and the Queen Elizabeth 2, which entered service in 1969, are the only true ocean liners currently operating in the world. The new Queen Victoria however, is a cruise ship and will not carry the RMS prefix like her siblings. Built at the famous Fincantieri Marghera shipyard in Italy, she was launched in December 2007 after a nineteen month build.

Arguably the most famous ocean liner of all time, the QE2 will soon be retired from service after a stalwart career spanning forty years. Instead of an ignominious end at the hands of Asian scrappers, she will live out her days as a floating museum in Dubai, just like the Queen Mary in Long Beach, USA.

Australians turned out in massive numbers to farewell this mighty monarch when she made her final departure from Sydney on February 25. This event was made all the more significant as it coincided with the arrival of her precocious new sibling, the Queen Victoria on her inaugural visit.

Since 1998, the Cunard name has been owned by the huge US-owned Carnival Corporation. Known for their lavish cruise liners, Carnival has ordered a second Vista Class cruise ship to partner the Queen Victoria. To be named MS Queen Elizabeth, she will be slightly larger than her sister at 92,000 gross tons and be the second largest Cunarder ever built next to the 148,000 GRT ocean liner, QM2. She will enter service in 2010.

Travelling aboard these very special vessels is an experience in itself. While retaining much of the glamour and elegance of the 20th Century queens, the new generation of cruise and ocean liners have unprecedented passenger space, facilities and entertainment options.

Regular Cunard Inner Circle award winning agency, www.ecruising.travel, consistently offers the best value packages for any of the famous and soon-to-be-famous queens. This time next year, Queen Mary 2 returns to Sydney as part of her World Tour and this time presents the best opportunity to sample her many charms at affordable prices. Right now, ecruising.travel is offering an unprecedented 50 per cent off the Sydney to Singapore sector with staterooms beginning at just $4999.00. Almost unbelievably, this package includes 16 luxurious nights aboard QM2 as she sails the romantic Orient. To complete the scene, the price includes one night at the iconic Raffles Hotel and airfare home. Other sectors are available too. Imagine a 25-night Pacific Ocean crossing from Santiago to Sydney or a 49-night Southampton to Sydney via the Panama Canal. These magnificent voyages are no longer a thing of fantasy. Contact ecruising.travel on 1300 369 848 or visit www.ecruising.travel for all the details on any Cunard Queen voyage.