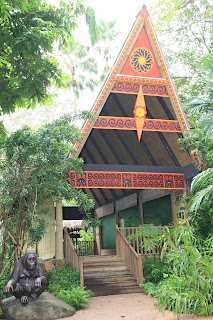 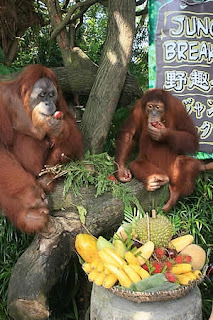 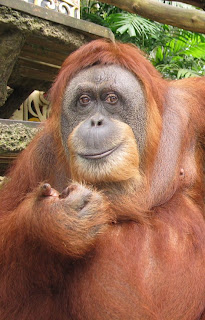 FOR WEEK BEGINNING 18 FEBRUARY 2008; PHOTO CAPTIONS AT END OF ITEM

SHE was a redhead who had a private meeting with Prince Philip, met
Prince Edward, sashayed with Elizabeth Taylor and Bo Derek, and had
the press at her feet when she breakfasted with Bjorn Borg.

And she had the American media positively groveling when she went
swimming in the pool of Singapore's Raffles Hotel with Michael Jackson
– in the process ruffling the star's travelling companion, his pet
chimpanzee.

And while her appointment book resembled a Who's Who of politics,
business, the Media, Hollywood and the world of entertainment, in a
career spanning nearly 40 years she never once boasted of her
encounters – nor betrayed a whispered confidence.

Sadly that glorious career came to an end earlier this month: she
nodded off into a sleep from which she simply never awoke.

Ah Meng – the world's best-known orangutan and a tourism icon in
Singapore since the early 1970s – was 48, or a venerable 95 in our own
human terms.

Hundreds of thousands of people claim friendship with Ah Meng by
having shared breakfast with her at Singapore Zoo over more than
twenty years, and millions more can remember her endearing antics from
their own visits to the Zoo's Sumatran Orangutan Habitat – or from
attending her highly-publicised birthday extravaganzas.

Ah Meng adapted to the human world from an early age. Soon after being
born in Sumatra she was smuggled to Singapore where she was sold
illegally to become a family pet.

When discovered by a vet in 1971 she was eleven years of age, and was
removed to a more appropriate home in Singapore Zoo. Within a few
years she was on almost "human terms" with her handlers, prompting the
Zoo in 1982 to introduce the famous "Breakfast with an Orangutan"
program that would allow her to interact even more with human beings,
and to raise funds for orangutan research and preservation.

And not only did ordinary visitors queue-up to join her for breakfast
and to have their photos taken with her, so too did countless
dignitaries, with everyone from royalty to pollies and film-stars
insisting that their official Singapore programs include an audience
with Ah Meng.

She soon became the Zoo's poster girl, was "interviewed" by over 300
international journalists, starred in more than 30 travel films, and
commanded fees of around $2500 an hour for a photo shoot.

She was also made a "Special Singapore Tourism Ambassador" in 1992,
the only-ever non-human recipient of the honour. The government gave
her a certificate and a bunch of bananas to mark the occasion.

Along the way Ah Meng had several partners including Rodney who died
in 1987, Pusung who is now in Adelaide Zoo, and Charlie with whom she
raised her five children and six grandchildren.

But she could also throw a tantie: once on a filming assignment
outside the Zoo she tired of being told over and again what to do,
climbed the tallest tree she could find and sulked there for three
nights.

When finally coaxed down she slipped and crashed the last 10-metres,
breaking her arm.

And on another occasion when a young French university student was
attached to the Zoo as part of her thesis on orangutans, Ah Meng
became incensed at the amount of attention her caretaker, Alagappasamy
Chellaiyah was giving the student.

So in true miffed-redhead form she wandered almost nonchalantly across
to the student, and gave her a monumental back-hander that laid her on
her back.

In recent years Ah Meng made fewer and fewer breakfast and promotional
appearances, Zoo officials fearing they could stress the aging gran.

And when news broke of Ah Meng's death on February 8th Singapore went
into collective mourning, while messages of condolence poured-in from
around the world.

Her body was displayed in a white coffin and four thousand people
attended her memorial service; after numerous eulogies, her long-time
caretaker, Alagappasamy swept aside tears to give her a final farewell
kiss on the forehead.

Some other mourners collapsed in grief.

Ah Meng's grave in a Zoo garden will be marked with a Durian tree –
her favourite treat – and a 1.5 tonne bronze statue of her.

And the Zoo's already decided that the next Sumatran Orangutan born
there will be named Ah Meng Junior in her memory.

one of her daughters.

a bronze statue of Ah Meng.