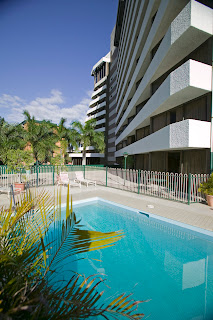 But few realise that a store they pass, or drop into for some of that
retail therapy, is on the site of what was once the home of
Brisbane's most macabre colonial murderer.

And not far away, guests cavorting in the palatial pool or dining
indulgently at one of Brisbane's finest hotels, little realise that
they too are doing so on another site once owned by that same
gruesome killer... nor that conversely the University of Queensland's
picturesque riverfront campus at St Lucia is there purely because of
this self same murderer.

Irishman Patrick Mayne arrived in Brisbane in 1844, getting himself
indentured as a slaughterman at Campbell's Boiling Down Works on the
fledgling colony's Kangaroo Point.

Mayne learned butchering skills to supplement his slaughterman's
wages, and soon after marrying Mary McIntosh in 1849, to the surprise
of friends invested sudden and unexplained wealth in a prime block on
Brisbane's very smart Queen Street.

Here, on what is now the Brisbane Arcade, he built a butcher's shop
with adjoining coach-house and upstairs residence, worked his way
onto the Municipal Council, and started buying-up some 400ha (1000
acres) of prime real estate, including at what was the-then remote
but now-fashionable Wickham Terrace.

But Patrick Mayne was also showing first signs of madness, attacking
perceived-enemies with a riding-crop or stock-whip, and abusing
others in fits of alcohol-fueled rage. Despite their affluence the
Mayne's were increasingly shunned by Brisbane's more polite society.

And extraordinarily in 1865 on his deathbed above his Queen Street
butcher's shop, Patrick Mayne blurted out that seventeen years
earlier in 1848, he'd murdered a man and that someone else had
already hanged for the crime.

Subsequent investigations revealed that on March 27 1848, Mayne and
two others had gone to the primitive Bush Inn at Kangaroo Point near
the Boiling Down Works, after learning that a drunken timber gatherer
named Robert Cox was boasting how much he'd earned from a big find of
precious cedar.

The three men ambushed the befuddled Cox after closing time, and next
morning a man rowing on the Brisbane River came upon human legs and
part of a torso in the water. An hour later police found the remains
of the body on the shore, and a head severed and propped-up in a
partly-built shed to further shock discoverers.

And behind the Bush Inn in a water-well that was also used to cool
milk, butter and cheese, they found Cox's entrails. A semi-literate
cook at the Inn was hanged for the murder, despite professing
innocence until the moment the trapdoors of the gallows dropped
beneath him…

Then to the surprise of most, not long afterwards Patrick Mayne
bought the land in Queen Street and built his butcher's shop, and
later two other shops nearby that he rented to a draper and a grocer.

Mayne had paid the equivalent in cash of nearly five years'
slaughterman's wages for all three properties, which coincidentally
was roughly the exact amount the murdered Robert Cox had been
carrying the night he was butchered.

After Mayne's death in 1865 and Mary's in 1889, their five children
consolidated their parents' land holdings and became generous
benefactors to numerous churches and charities.

Amongst prime sites sold off was one on which Accor's luxury Terraces
on Wickham Hotel now overlooks the spectacular Roma Street Parklands,
its 170 grand guest rooms and salivating dining a far cry from the
rustic Bush Inn at which Patrick Mayne orchestrated Queensland's
bloodiest murder 160-years ago.

In 1924 the surviving Mayne children, none of whom had married due to
their father's madness and the insanity of a brother, tore-down their
parents' butcher-shop home and built the elaborate Edwardian-style
Brisbane Arcade on the site.

Three years later they bought land at St Lucia and donated this to
the fledgling University of Queensland, with all profits from the
trust they established to run the Brisbane Arcade, also going to
support the University.

When next you're visiting Queen Street, pause at the Colorado
Clothing Store in the Brisbane Arcade – it's on the historic site of
the original Mayne butchery, home and coachhouse.

on the now-prestigious Wickham Terrace.