PETRA – NO LONGER A SECRET 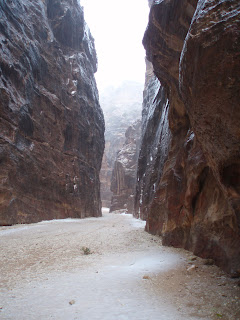 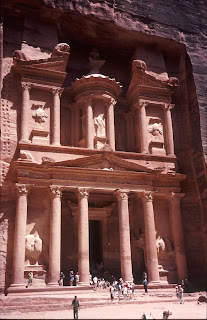 PETRA – NO LONGER A SECRET

If the Swiss adventurer Johann Burckhardt hadn't had a touch of conman
about him, the extraordinary archaeological secrets of the ancient
Jordanian city of Petra might still be just that – secrets.

It was in 1812 that the inquisitive Burckhardt passed through the
region in southern Jordan near the intersection of the great caravan
routes from Gaza on the Mediterranean, Damascus in neighbouring Syria,
Eilat on the Red Sea and the Arabian Gulf.

Having heard tales of the wealth and beauty of Petra (Greek for "City
of Rock") Burckhardt posed as a trader to gain entry to the city which
is guarded by rings of rugged sandstone mountains, and at that time
accessible only via a three metre wide path that ran for just over a
kilometre between the towering 100-metre walls of a ravine.

A geological fortress, Petra was the stronghold and treasure-laden
city of the Nabateans from 400BC until the Romans finally captured it
in 106AD.

It was the mountains that deterred most raiders, but Petra succumbed
to the Muslims in the 7th Century, and then the Crusaders in the 12th
Century, before falling into ruin.

But it wasn't until 1924 that the British carried out the first
archaeological excavations, and 1950 before the Jordanian Department
of Antiquities allowed full-scale excavation.

Even today archaeologists are still discovering new aspects of Petra,
and just a decade or so ago, floodwaters racing through the ravine at
the entrance to the city unearthed perfectly preserved Roman roads
several metres below the previous surface.

Petra's ancient structures were carved out of walls of solid
dark-rose-coloured stone, with the Treasury of the Pharaohs, and a
semi-circular theatre that seated around 3000 people, amongst its most
amazing architectural wonders.

Today archaeology buffs can spend days roaming Petra, but for the
average tourist a day's visit can embrace most of the major
attractions such as the Siq (ravine), the Treasury, the Theatre, and
the rock tombs on the way to the Museum.

The most intricate rock carvings remain intact, offering insights into
the skills and lifestyles of the ancient inhabitants.

For the energetic the 800-step climb to Petra's largest monument –Al
Deir (Monastery) – is rewarding, although some of we more slothful can
choose to have a donkey carry us up the winding path, pretending to be
fit by opting to walk back down to friends at ground level.

The Temple of Petra was an important early pilgrimage site, and today
worshippers and priests still follow the ancient processional route to
do it.

About 250 km south of Jordan's capital Amman, Petra is a three hour
drive along a road where the sparseness of the desert and the
durability of the people who live in it are extraordinary; in places
the barren, featureless desert is broken by the occasional Bedouin
goatherd tending a scruffy flock along the roadside.

And past a rare oasis of vineyards, olive groves and vegetables plots
comes the equally surprising view of guard towers and barbed-wire
barricades that the local guides often refer to as Suwaqai: "It is
Jordan's only five star prison," our driver tells us. "Populated
largely by thieves and drug pushers and - " he pauses for a moment.
"And politicians".

On the way back to Amman we divert from the main arterial highway to
take the Kings Road to Tafilah. The scenery is a surprise, embracing
the lush Jordan Valley that's part of the Great Rift that runs south
through Africa for thousands of kilometres.

The road then leads through the Shirat Mountains – massive rock
outcrops and plunging ravines, which vary in colour from light, honey
to deep plum – and emerges near the Dead Sea separating Jordan from
Israel.

At 400-metres below sea level, the Dead Sea sustains nothing but
bacteria because of its high levels of salt that is used for making
expensive cosmetics, and the sight of the Dead Sea proves a beautiful
one after the bleakness of the inland desert.

Adventure World has seven night packages covering Amman, Petra, the
old Roman city of Jerash, Wadi Rum and the Dead Sea for $1561,
including accommodation, most meals, transport and sightseeing.
Details from 1300-363-055 or see www.adventureworld.com.au

PHOTO CAPTIONS: THE spectacular Treasury building in Petra, typical of

the city that was built from
rose-coloured stone.

PETRA's secrets were guarded by
these narrow