TALL AND TAN, AND YOUNG AND LOVELY… 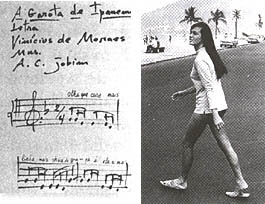 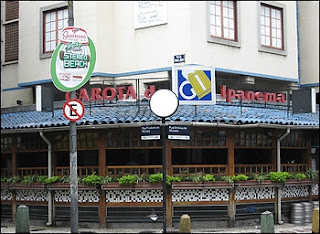 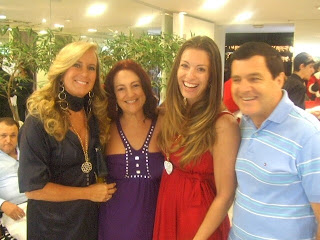 TALL AND TAN, AND YOUNG AND LOVELY…

Forty something years ago she was the best known teen in the western
world, the inspiration for a new-rage bossa nova-beat song that
overnight swept the charts from Lima to London, Chicago to Sydney…

Yet despite millions singing along to the lyrics played over and again
on radio and jukebox, few if any had any idea of who she was – or even
if she existed at all.

To them she was the anonymous

and young and lovely

the girl from Ipanema…

Remarkably, too, although the hit tune about her won a Grammy for Song
of the Year in 1964 and is still the fifth most-played record in
history, the real Girl From Ipanema – the actual muse about whom it
was written – earned not a cent from it.

And forty-four years later this dream girl, now a mother, grandmother
and highly successful businesswoman of still extraordinary beauty and
vivacious personality who

and sways so gently

still turns heads on the beach, on the street, just doing her shopping, so that

each one she passes

The story of the Girl From Ipanema began in the early 1960s in the
somewhat ordinary little open-air Bar Veloso in the south of Rio de
Janeiro, a place frequented by arty types who would argue politics,
philosophy and their own crafts over beer and rib-sticking black
coffee, and through the haze of cigarette smoke wolf-whistle pretty
young things on their way to nearby Ipanema beach.

Amongst them was a musician named Antonio Carlos Jobim who had
something of the hots for a particularly statuesque 17-year old teen,
Heloisa Pinto who would pass the Bar Veloso daily for her afternoon
swim.

One day Jobim convinced his drinking mate, the lyricist Vinicius de
Moraes after a glass or seven that they should write a song about this
girl, whom de Moraes once summed-up as "a golden mixture of flowers
and mermaids, full of light and grace….."

and young and lovely…

After a year of fits and starts The Girl From Ipanema launched in 1964
to instant success.

Today a visit to the Bar Veloso is a must-do for thousands of visitors
to Rio, and while still on its original site on Rua Montenegro it's
been reborn and renamed Garota de Ipanema (The Girl From Ipanema.)

Replicas of de Moraes and Jobim's original napkin adorn the walls
alongside photos of the Girl, and patrons can snap-up T-shirts
emblazoned with the napkin's words and score.

And despite his ardour Jobim never got his girl: Heloisa, who long
refused to believe she was the inspiration for the song, married
long-time sweetheart Fernando Pinheiro and, knocking back lucrative
offers from Hollywood to adorn the silver screen (her mother said
going to America would lead to drugs and worse,) settled into being
the perfect Brazilian housewife and mother.

Her world, however, was turned topsy-turvy twelve years later when
Fernando's iron and steel business collapsed with cuts in import
tariffs; Helo (as she now called herself) decided it was time to
cash-in on her earlier fame.

Still strikingly beautiful at 32 she started modelling, opened a
modelling school, hosted her own radio program and wrote a newspaper
gossip column to keep the family afloat.

My first encounter with The Girl From Ipanema was in 1991 while in Rio
to interview fugitive British Great Train Robber, Ronnie Biggs
holed-up there. I found Ronnie a likeable but forgettable rogue; the
Girl haunting ever since.

Still as vivacious and statuesque as ever, the lady who once shocked
fellow swimmers by wearing the first-ever two-piece on Ipanema beach,
told me last week that she would just love any visiting Aussies to
drop into her shop.

And when you meet her, I'll bet you'll just go… Ahhhhh

PHOTO CAPTIONS: THE GIRL as she is now: just as stunning at 62, Helo

THE scribbled first words and
score of the song – on a

napkin; and The Girl From Ipanema
as she was all