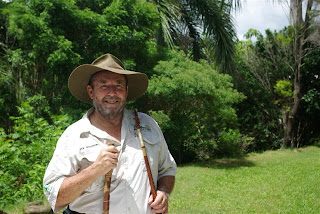 david ellis
"LOOK for the bubbles," says Col Adamson as our party of hopefuls, victims of an itinerant tropical downpour, flounders along a muddy trail beside the Broken River in Queensland's Eungella National Park.
We're high in the rainforest hinterland behind Mackay, most of us more interested in the umbrellas we were told to bring, but didn't because only sissies carry umbrellas. Or billy tea and damper we're promised at a dry bush camp in the Bali Hai-cloudy mountains; anything in fact to compensate for the dinner we drank the night before.
"There they are," says Col. "Just off that sunken tree."  We see nothing but giant raindrops pock-marking the muddied river.
"Now, there," says Col, enthusiastic as a child. "Closer to the shore… there, there, here he comes… come on, mate, come on!"
Then we see it. Our first platypus in the wild. A tiny fellow swimming straight towards us, duck-bill up curiously sensing the presence of we intruders. Aggrieved, he slips beneath the surface without a ripple. "A young one, so there's a family around," says Col, the park's Number One platypus-spotter with a 100% record on-tour.
The rain stops, the sun comes out, and an adult of the family surfaces, but obviously equally disgusted at our presence, she too disappears.
"They'll travel quite a way underwater looking for clearer water conditions," says Col. "Always look for the bubbles they breathe out while feeding before they come to the surface."
We note his advice and head for the mini-coach, still ruminating on the bubbles in last night's dinner.
Col Adamson and wife Jenny set up Natural North Discovery Tours in Mackay in 1995, did so well they were made an offer they couldn't refuse, and stayed on with the new owners who run a broader range of tours and excursions as Reeforest Tours.
In his years here, Col – who chucked-in running his own transport company in NSW to escape the rat-race – has taught himself enough about the area to fill a myriad reference books.
Want to know Mackay's history? Col will take you back to the 1860s when, in search of new pastures, a one-time seaman named Captain John Mackay, six stockmen and two Aboriginal trackers drove two bullock teams and 1200 head of cattle hundreds of kilometres north from Armidale. They named a river that ran through the fertile valley they discovered, the Mackay.
And why all the sugar cane? "The cattle got water-logged in the first wet season, so the settlers tried growing maze and sugar and even coffee and tea –  only the sugar survived the wet."
Col turns to the subject of Eungella. "It has the most rainforest of any National
Park in Queensland," he says. "It used to get over 2.5 metres of rain a year, but that's been leaner in recent years... the bird and animal life absolutely thrives here: kingfishers, cockatoos, honeyeaters, bowerbirds, golden crowned snakes, tusked frogs, platypus, geckos."
And 830m up in the clouds there's the Eungella Chalet, a circa-1930 guest house that at one time did just as well as a sly-grog joint because police found it impossible to raid with only one road through the dense rainforest.
"And in the 1940s," Col says, "the Americans used it for R&R for officers and put in a fire escape – not in case of fire, but so the girls they brought with them could get away if they saw the Military Police coming."
We stop now at one of the jewels on Col's tour: a serene bush camp dubbed The Finch Hatton Hilton in the spectacularly rugged Finch Hatton Gorge. Here the ever-affable Col prepares an impossibly grand bush barbie including billy tea and damper, all the time spinning tales both tall and true.
Then, well sated and last night's dinner forgotten, it's time to head for the airport. As we pass a small sugar town's tiny community hall, Col says a local lady used to sing there to entertain the mill families.
"But to try to further her career she and her hubby had to move away.
"Her name was Nellie Melba."
To join Reeforest Tours' Platypus & Rainforest ECO Safari, outback tours and excursions around the Mackay area and Whitsundays, phone (07) 4959 8360 or visit www.reeforest.com
……………
Posted by rodeime