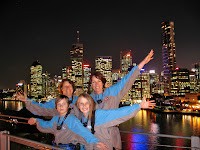 “Those people down there look like munchkins!” exclaimed my excited daughter as she looked down on couple walking through the park below while she climbed up the stairs in the first span of Brisbane’s Story Bridge.

I knew then that my 140cm “Wizard of Oz” fan was now quite comfortable with the thought that she was climbing to the top of the bridge she had only previously driven over or played under. A few minutes earlier, she, and her friend Emma who is a similar height, had been unusually quiet as they concentrated on guiding their harness ropes up the safety wire on the side of the steps leading to the 80m summit of the bridge.

Sammie is the wild child of my mob – the one who is crazy about animals, always likes to do her own thing and on the lookout for adventure. When asked if she’d like to do a Story Bridge Adventure Climb for her 10th birthday the day couldn’t come soon enough. Even more thrilling was the fact that the climb operators had recently dropped the minimum age of climbers from 12 years to 10, so she and Emma could boast about being some of the first 10-year-olds to climb the Brisbane landmark.

Even more poignant than sharing this special occasion with Sammie, was the thought that some of the people who built the bridge were probably only a few years older than her and they certainly handn’t had the benefit of a guide, special climbing suits and jackets to keep out the wind and rain, headsets for communication and safety harnesses.

The climb leaders are a collection of extra-ordinary people who spend their days hosting people like us up and over the bridge, all the while supplying an entertaining commentary on Brisbane and the Bridge and making sure the safety rules of the climb are followed at all times. It is they who check you don’t have any objects stashed away on your person that may fall on the cars below, who breathtest you before the climb, who show you how to put on all the gear from the suits through to the harness, two way radios and headphones and then take photos of you while on the climb.

Everything is catered for – even people with runny noses can rest assured they won’t have to endure embarrassing drips because handkerchiefs with elastic arm bands are provided, along with other items like hair scrunchies (you have to until your hair it is has been pulled back), lanyards for glasses and so on. Even the wind jackets which can be put on over the climb suit are clipped in a bag hanging from your waist. Just unzip, pull it on and again, it’s even attached within the bag so there is no chance to wind will take it from you.

This was an evening climb – 4.20pm on a weeknight evening in Autumn, so we saw the sun go down and the moon and stars come up. The lights of the city came on, the traffic grew heavier and the magic of the experience continued to grow as time went on. There’s something quite lovely about being away from the hustle and bustle, about seeing it all from on high. The climbs were leaving at 20 minutes intervals this day so we were able to wave at other groups on different stages of their climb, all of whom seemed suitably awed by the beauty of the evening and the experience. Incredibly the very windy day had also transformed into a relatively peaceful night with only a gentle breeze caressing us.

Beau, our lanky leader, who later admitted we had been his first unsupervised climb, was great company, was not at all phased by the fact there were two little ones in the group. In fact he seemed to like the fact that his every word was being hung onto like the rail on the side of the stairs.

He happily chatted throughout the climb, admitting early on that as an engineering student he found the whole concept of the bridge and its construction amazing. He was keen to answer questions and happy to share a string of very corny jokes with us climbers.

As we cleared the top of the bridge once more and began our descent both girls groaned a little about their adventure ending but agreed it had been really ‘cool’ and maybe they were getting a little tired from all the excitement – after all it was a school night and nearing bed time!

Climb costs from July 1 for children (10-16 years) start at $75.65 for day climbs and night climbs from Monday to Friday, $84.15 for Saturday and Sunday night climbs and Monday to Thursday twilight climbs. Adult only prices apply for Friday-Sunday twilight climbs ($130). Family rates are $288 for a maximum of four people including one or two adults. All children must be a mimimum of 130cm tall and must be accompanied by an adult. If climbing in groups, then every three children must be accompanied by at least one adult.

All climbers receive a Climb certificate and a Return Climbers Pass enabling them to climb for free for a period of 12 months when they book again with 2 full paying climbers.

For more information and bookings visit www.storybridgeadventureclimb.com.au or call 1300 254 627.
Posted by rodeime