STEELING THROUGH THE NIGHT 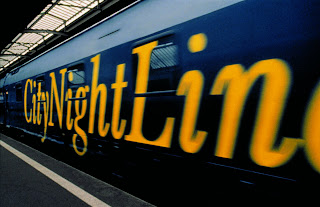 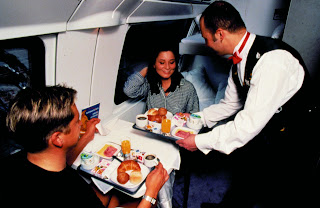 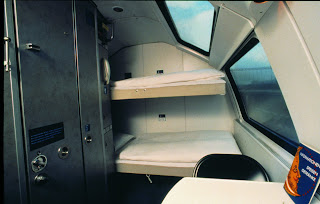 Travelling across Europe by rail is popular for its city-centre to city- centre practicalities, and here Frank Linn discovers an overnight train journey that combines room, bed, breakfast and travel while he dozes comfortably.

I LOOKED at the tiny compartment and thought: I can't sleep in that!

Twelve hours later I'd changed my mind: I had slept in that. And quite well, thank you.

THAT was a two-person Economy Class compartment for the 12-hour  CityNightLine train service from Zurich to Berlin, a little space measuring just 2m x 1.5m, with half the compartment occupied by a single bed.

A second bed above is folded back out of the way. Two small cupboards, a  handbasin with hot and cold water, mirror, electric plug for shaver or hairdryer and a small table under the window complete the infrastructure. The window is full width and there's a skylight window above, with blinds for both.

There are crisp white sheets, pillow, doona, towel, face washer and hand towel; lights are overhead, at the mirror and at pillow level for reading in bed.

I was a single traveller in a two-berth sleeper compartment that on some night trains are classified as Deluxe Singles complete with in-cabin breakfast dining.

A wander along the corridor reveals three and four person sleepers – in which chatting passengers are snacking on food they've brought with them for the journey.

A steward comes and asks me to stay in my cabin until she returns. What's this all about, I wonder? Ten minutes later she's back, takes my ticket and Passport, locks my compartment door behind me and ushers me to the dining car where she now becomes my waiter.

Chicken soup, steamed salmon and rice are washed down with Pinot Noir. I chat to a young couple who use the night train because their work has them in both Zurich and Berlin during the week.

They have a two-person Economy Class compartment, and use the CityNightLine rail instead of air as their commitment to combating carbon emissions.

While the train was more expensive than a cheap flight, my companions felt better about themselves for their choice, and say they genuinely enjoy sleeping aboard.

To bed. I call the steward-waiter to unlock my cabin. A couple of pages of my paperback murder-mystery under the reading lamp next to the pillow and I doze off…

We're now zipping through the dark countryside somewhere in Europe, with the consistent hum from the diesel engines up front and the swish of the steel tyres below broken only by the air concussion impact of the train entering a tunnel or another train flashing past in the opposite direction.

When the train pulls into one it's several anonymous stations in southern Germany and remains stationary for 10 minutes my sleep is deep, but I awake briefly each time as we swagger our way slowly back across the tracks to our  own dedicated fast line to the next city.

At 6:30am a different steward knocks on the door to take my breakfast order. It arrives just 10 minutes later with my Passport clipped to my ticket that in turn is clipped to the breakfast tray … ensuring the right Passport and right ticket get back to the right person.

Breakfast includes yoghurt, two bread rolls, a croissant, butter, strawberry jam, honey and a plastic-encased European breakfast (salami, ham, cheese) as well as hot water and a cardboard cup with teabag. It's a big start to the day with the yoghurt cold and the tea hot.

I use the small table under the window for the breakfast tray and sit on the bed until the train's PA system kicks into life, advising of our arrival time at the swish new Berlin Hauptbahnhof.

The experiences of fellow travellers are was much the same as mine, although one who suffers from slight claustrophobia changed the direction of her sleeping so her head was under the window – and she left the blinds up.

The CityNightLine service, and other night trains in Europe, can be booked in Australia through Rail Plus. See www.railplus.com.au

COMPACT: Room on rails – a 2-berth compartment on the CityNightLine.

BREAKFAST is served – hearty start to the day in a Deluxe Compartment.

EASY to identify at the station, the CityNightLine has its own dedicated fast track.