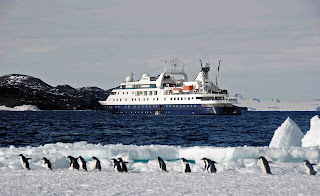 CruiseMart is offering free return air and a night's accommodation at Invercargill in New Zealand to join two cruises to Antarctica aboard the boutique expedition ship Orion in December of this year and January 2009.

And as well as this exclusive offer the December 2008 cruise will feature onboard talks and tips by renowned photographer, Ken Duncan.

The December 11 2008 departure will visit Snares and the Auckland Islands with their profuse birdlife, the sub-Antarctic Macquarie Island that's been described as one of the Wonder Spots of the world and home to 20,000 breeding pairs of penguins and the relics of an old whaling station, and cross the Antarctic Circle to Cape Denison in Commonwealth Bay for a visit to Mawson's Hut that still stands today as it was on his departure in 1913.

There are also nine days cruising the region before the 100-passenger Orion ends this 16-night expedition in Hobart.

A 20-night return package on January 12 2009 sails from Invercargill's port of Bluff for Enderby Island with its vast penguin colonies, Macquarie Island, Cape Adare and the Ross Sea region bounded by the Ross Ice Shelf that's the size of France, volcanic Campbell Island with its forty bird species, and 11-days cruising the region.

Packages include all onboard meals, entertainment and educational programs, and Zodiac landings; the 16-night December package is priced from $18,325 and the January 2009 20-nights from $22,905 (pp twin-share.)