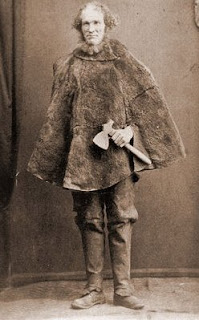 WHEN the colourful convict Moondyne Joe was sentenced to Fremantle Prison in 1871, the authorities reckoned that despite having escaped more times than anyone else from prisons and lock-ups, Joe had finally met his match.

In fact so positive was Western Australia's Governor Hampton that his newly revamped prison was escape-proof, he promised if Moondyne Joe escaped, he would personally grant him his freedom.

Joe did escape, and swallowing his pride Governor Hampton granted him a Ticket of Leave to work at the Convict Depot at Busselton in WA's south-west, and a Pardon if he stayed out of trouble for a further four years.

Sadly Joe couldn't help himself and was soon back behind bars, and would doubtless get a kick out of knowing that this month major historic Western Australian winery, Houghton's has honoured his memory on a trio of new wines – even though it was for trying to rob their winery in 1869 that earned Joe one of his many stints in the clanger.

Joseph Bolitho (Moondyne Joe) Johns and a mate were transported to Australia for stealing several cheeses, three loaves of bread, some bacon and a shoulder of mutton from a house in Wales in 1848.

After arriving in Fremantle and getting his Ticket of Leave, Joe headed off to the Darling Range just east of Perth and got work trapping stray stock around what the local Aborigines called Moondyne Springs.

He stayed out of trouble until charged with horse stealing in 1861 and remanded in a local lock-up, but escaped on the horse he had been accused of pinching and which was being held as evidence – and to make matters worse, with the saddle of the magistrate who'd sentenced him.

Not surprisingly, when quickly recaptured Joe got a three year sentence, and soon after being released was charged with illegally killing an ox and got another ten years.

Assigned to a work party on the Canning Flats, Joe escaped after just one week – and for this got an extra year in irons, and when caught trying to escape yet again earned another six months, but escaped once more with two other convicts and held up a country store that won him a further five years.

One of Joe's Fremantle Prison tasks was breaking rocks for road-making, and he soon had a mound of the stuff a couple of metres high that greatly impressed his jailers – until they discovered too late that the-now nick-named Moondyne Joe was also digging a hole in the prison wall out of sight behind his rock pile.

He slipped through the hole into the Prison Superintendent's vegie garden, walked out through his front gate and remained free for two years until a remarkable stroke of bad luck in 1869.

With a healthy thirst upon him, Joe had donned a wheat sack with two 9-litre barrels tied to the front and back, wrapped his boots in sheepskins to cover his tracks, and broken into the Houghton Winery in the Swan Valley.

He was still taking a glass in the cellar at 1am when a police party investigating a nearby drowning was offered a rewarding drop by the winery owner.

Hearing them arrive Joe made a stumble for freedom but ran straight into the arms of the surprised troopers; he got a further twelve months in irons, and when caught making a key to his cell door two years later was sent to the revamped "escape proof" Fremantle Prison where he was promised his freedom if he managed to escape.

Moondyne Joe was declared a free man in 1873, married a lady half his age when well into his 50s, and stayed crime-free. Sadly at 69 he was committed to the Fremantle Lunatic Asylum where he died in August 1900, and is buried in Fremantle Cemetery's Pauper Grave 580A.

Houghton Wines has now released three wines in memory of Moondyne Joe, who had tried to rob their Swan River Cellar all those years ago: The Bandit 2008 Sauvignon Blanc Pinot Gris, The Bandit 2008 Chardonnay Viognier and The Bandit 2007 Shiraz Tempranillo are priced at $19.95 each.

Try them at the winery's Cellar Door in Dale Road, Middle Swan that's 40-minutes from Perth and open daily 10am-5pm.

. HOUGHTON's Cellar Door today: it was trying to rob the historic winery that landed Moondyne Joe in gaol... yet-again

. THE Bandit Sauvignon Blanc Pinot Gris – one of Houghton's new trio in memory of Moondyne Joe.