STEEL YOURSELF FOR THIS ISLAND IN THE SUN… 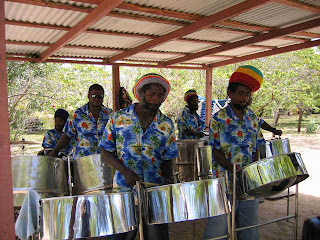 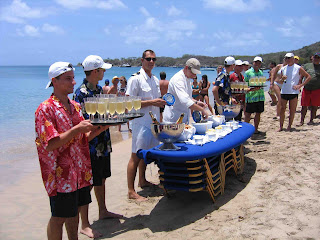 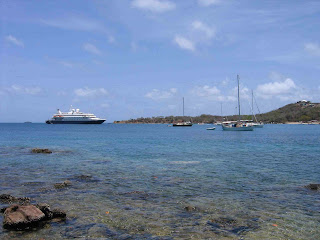 "It's just to know that I've not died and gone to heaven," I tell her.

We're gazing across from breakfast on the deck of our little cruise ship to a minute speck of land called Mayreau in the Caribbean's Grenadines, an emerald mermaid garlanded with a necklace of white as she floats in the bluest of blue seas.

Mayreau looks convincingly straight out of the Garden of Eden, and we're told that in fact, at under four square kilometres, it is one of the tiniest dots in all of the jumbled patchwork of islands and cays that make up the Caribbean.

Cameras clatter endlessly and our anchor breaks the glass-flat surface of the bay with barely a splash. Ship's engines sigh to a halt; it's quiet, unbelievably quiet. Just the faint whoosh-whoosh-whoosh of the radar scanner, the squawk of a lone sea-bird overhead, the hint of flags flapping in a zephyr of a breeze, distant laughter from one of the half-dozen yachts at anchor in this tiny aquatic paradise…

Half an hour later we're landing ashore from our ship's tender… just 110 of us on Day 6 of a 7-day cruise from San Juan to Barbados. And ninety-five crew – nearly one for every one of us – many of whom are already ashore preparing a grand day of beach games, splashing in the water, hiking a bush trail, snorkelling the reef, and wining and dinning on our own reserved stretch of talcum white sand.

Mayreau is peopled by just 300 of some of the Caribbean's friendliest and most extraordinarily polite souls who live in a hillside village that's simply called The Village.

They have no airport, no communal electricity, and no running water, and between them own just four motorized vehicles – and they've a ban on jet skis and similar annoyingly noisy playthings.

There's a Catholic church, a few guesthouses and a private resort tucked away in the bush.

All overlook the bay with those half dozen yachts displaying flags from America, Canada, Europe... and our own little cruise ship, the 55-couples SeaDream II that with her sister SeaDream I are the only cruisers small enough to slip into this peaceful haven from November to April – the big fellas must cruise right-on by.

Ancient volcanic peaks of surrounding islands claw their way up into wispy strands of clouds that float overhead with a languidness unique to the tropics.

And as the vegetation is as green and lush as the beaches are golden and white, we realise why Hollywood chose this maze of islands that was the bolt-hole of many a pirate captain in days of yore, to film Pirates of the Caribbean.

The few restaurants and bars feature West Indian cuisine – loads of chillies, garlic, onions and spices tossed into frying pans of fresh local seafoods, poultry and tropical fruits and vegetables – and cater to visiting yachties and a smattering of tourists who come by ferry from neighbouring islands for a day in paradise.

For today our own private stretch of beach has been swept clean by our Mayreauan hosts, and our ship's crew soon have rainbows of cocktails (including their own unique rum-based PainKiller) passing amongst us; bottled waters, soft drinks, beers and wines (that are all included from the bars and at meal-times throughout our week's cruise) appear from ice boxes, table-cloths are laid, crockery and cutlery spread, beach umbrellas pop up like lollipops...

And while the butts of beef, the pork ribs, sausages, hamburgers, shrimps and chicken drumsticks sizzle over charcoal barbecues, salads, desserts, fresh-baked cakes and fruit platters are spread along tables under the trees and a huge thatch-roofed gazebo.

And somehow a local steel band materialises out of the bush and is soon banging out Never on Sunday, Lambada, Hot Hot Hot,  My Way… and of course a foot-tapping Island In The Sun.

I again ask my wife to pinch me. I really do need to know that I've not died and gone to heaven…

(To find out more about cruising to the Caribbean's Mayreau see your favourite travel agent or check-out www.seadream.com)
…………….

[] SEADREAM II joins cruising yachties off tiny Mayreau Island in the Caribbean – only the smallest of cruise ships can get in here.

[] BUBBLY on the beach for lucky visitors to this part of the Caribbean.

[] TOE-tapping steel band that "materialised from the bush" during lunch break on idyllic Mayreau.