BRIDGING OCEANS JUST THE TRICK AT 90 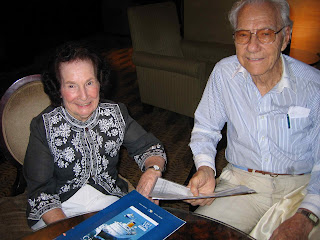 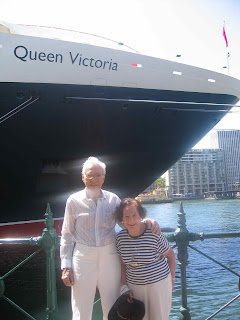 PENNSYLVANIAN Ed Halluska got so smitten with the game of bridge after just one session, that he gave up his engineering job to learn all about it and become a professional bridge instructor.

That in turn led to he and his wife Helen deciding to go on a cruise that was advertised as having daily bridge sessions, which led to both of them then  becoming smitten with cruising.

And so they could indulge their new-found loves, Ed pulled off a neat trick snaring himself a job as a bridge instructor on a cruise ship.

Today they've become something of record breakers, although they never intended it being that way. "It just happened," said Ed when they passed through Sydney recently as part of a world cruise aboard Cunard's 5-star Queen Victoria.

And most startling of all this is that Ed fesses-up that a few days after leaving Sydney on their way to Singapore and London, with countless ports in-between, he'll be celebrating his 90th birthday aboard ship.

As well, this isn't Ed and Helen's first world cruise, nor their second, nor their third. Not even their tenth, fifteenth or twentieth… this is their twenty-third world cruise, and their 316th sailing somewhere on the planet. You almost get tired just thinking of the logistics – never mind keeping enough space in the Passport for another stamp.

And no, Ed's no longer a cruising bridge instructor. Today he and Helen just cruise for the love of it, and for Ed to play bridge every day with other passengers. Helen sometimes joins in, but says "I'm not as good as Ed – I don't concentrate enough."

And the quietly-spoken Ed fesses-up once again – this time as to why he's no longer a cruising bridge instructor, after the company called one day to say "they'd have to let him go."

When he asked them why, after much stammering and stuttering they finally said  "well, you know Ed, it's your age..."

"AND WHAT, I demanded to know," and this is the first time we've heard him raise his voice above barely a whisper. "WHAT is wrong with being 80?"

But let him go they did, so Ed and Helen decided to just keep on cruisin',  spending half of every year at sea.

"When we cruised into Sydney Harbour on Queen Victoria we'd chalked up 3,716,656 kilometres during 4,497 days at sea in forty years," he says. "And we've still got to get to London, and then home for a few more short cruises and then a world cruise next year on the British ship Saga Ruby."

With all this exposure to The Good Life, we ask, how do they manage to keep as trim as they are? "We don't miss any meals, but then we don't clean the plate ether," Ed says.

"We eat only what we feel we need to at breakfast, lunch and dinner – at dinner maybe just a bowl of soup with crackers and dessert one night, and next night just the main course – and fish at least six times a week."

They also walk as much as possible both aboard and in port, and Ed does daily sessions in the onboard gyms that include 80 push-ups – non-stop. Again a nice trick at 90.

And on their way to Sydney on Queen Victoria a fellow guest asked Helen if she missed being at home. "Good Heavens no," Helen replied. "I don't have to do the cooking or the washing up, and when we go back to our cabin after breakfast our bed is made up and the room is cleaned."

And now 87-years old Helen fesses-up: she was trained in voice and enjoys a bit of a sing on stage every now and then. And Ed boasts how she got a standing ovation a few nights before arriving in Sydney with her rendition of the Italian song Anima-e-Core – How Wonderful To Know You Really Love Me.

How wonderful indeed, for this sprightly couple who've been married 66 years.

If you'd like to celebrate a birthday, an anniversary or no real reason at all on Queen Victoria's next visit here in February 2010, phone 1800 225 656 for the name of the Cruiseco cruise-specialist nearest to you.

[] GLOBE-trotting Ed and Helen Halluska had cruised 3,716,656 kilometres in 40 years by the time they arrived in Sydney recently on Queen Victoria

[] BACK to the drawing board – planning next year's world cruise on Saga Ruby.