THOUGHTS OF ROMANCE A WILD CALAMITY 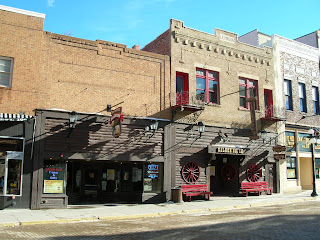 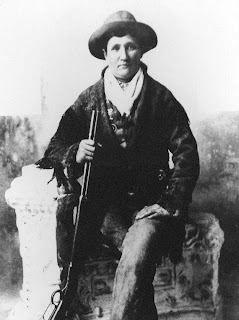 HE cut an almost debonair figure as he strode the boardwalks of Deadwood in America's legendary Wild West, while she was a part-time hooker whose youthful good looks had long gone and she now mostly dressed like a man and cussed as enthusiastically.

And she got her kicks from shooting-out bar-room chandeliers while smashed on whiskey.

Yet this seemingly odd couple shared time together, and as she approached death nearly thirty years after he was shot dead at a Deadwood card table, she begged to be buried alongside the man she described as "my great love."

But despite 130 years of research, students of the Wild West are as perplexed today as ever about the real relationship between the two – legendary lawman Wild Bill Hickok, and the irascible Calamity Jane.

We know that just as in Hollywood's enactments, the Deadwood Stage did roll-out over the hills, lawbreakers were lynched on the streets of "the shootin'est town in the West," and that Wild Bill and Calamity Jane were known to step the boardwalks together and share a drink or five in the local saloons.

Deadwood had hit the headlines in the mid-1870-s when gold was found in the surrounding Black Hills of Dakota. Within days thousands of hopefuls had flocked to the Hills, scooping-up nuggets "as big as candy bars" and blasting their way into the gold-bearing hillsides.

Thirty-thousand miners invaded Deadwood in the 1870s and '80s, and headstones at the town's Mt Moriah Cemetery tell how many of them died by rope, bullet, booze or natural causes.

But unlike in the movies, Wild Bill Hickok did not go to Deadwood intent on putting on a badge again and upholding justice: he left his newly-wed bride at home in Wyoming and jumped the Deadwood Stage with the intent of relieving gullible miners of some of their Black Hills gold at the poker table.

And when he arrived there in 1876, he was mysteriously accompanied not only by a colourful former Pony Express rider, 'Colorado' Charlie Utter, but by Calamity Jane whom he'd previously met when they were both Army scouts.

The one-time Marshall Hickcok (who between engagements moonlighted as a bounty hunter and professional gambler,) is known to have considered Calamity little more than a drinking mate, but to the alcoholic hooker he was always "my great love."

And Calamity proved to be anything but Hollywood's Doris Day who would host "Marshall" Wild Bill to candle-lit dinners in a rose-gardened Deadwood cottage.

But whatever their relationship was, it ended on August 2 1876 when Wild Bill – who drank with his left hand to keep his gun-hand free – dropped into the Number 10 Saloon for a game of poker. As the only seat at the table had its back to the door, he opted-out for fear of being ambushed from behind.

But fellow gamblers talked him into staying, and he'd played just a few hands when a drunken hoodlum, Jack McCall stumbled through the bat-wing doors and shot him dead with a single bullet to the head. Wild Bill's two black aces and two black eights spilled to the floor, and are known to this day as "Deadman's Hand."

McCall was tried, but acquitted after claiming the killing was revenge for Hickok killing his brother; when it was discovered that McCall's outlaw brother had died years earlier, he was recaptured and hanged.

Calamity Jane meanwhile was doing what Hollywood didn't tell us: she was working as a barmaid and part-time prostitute in local saloons, often taking her pay in whiskey.

And just before her death aged 53 she asked that she be buried next to Wild Bill, even posing haggard and gaunt with a bouquet at his grave. Martha 'Calamity Jane' (Cannary) Burke died on August 2 1903, bizarrely twenty-seven years to the very day after the shooting of James Butler 'Wild Bill' Hickok.

Deadwood today is a fascinating trek back into the Wild West, with an El Dorado of restored boardwalk casinos, saloons (including the Number Ten Saloon,) dining halls, an1860s gold mine to explore, and museums recalling the days of the Wild West.

Canada & Alaska Specialist Holidays can add a short-break to Deadwood to a USA, Canada or Alaska vacation; phone 1300 79 49 59.

[] CALAMITY Jane dressed and cussed like a man – and was no Doris Day.