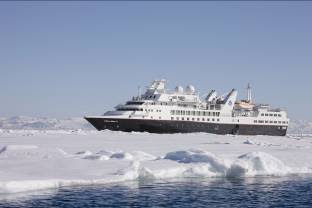 Silversea's state-of-the-art expedition vessel, Prince Albert II, is offering a thrilling programme of voyages from May to August 2009, taking in the most remote highlights of the British Isles and the icy wilds of the Arctic.

An 11 day Around Britain sailing from Portsmouth, England departs 17 May 2009 and takes in the beautiful Channel islands of Alderney and Guernsey; Waterford and Dublin in Ireland; the Scottish isles of Gigha, Islay in the Hebrides and Stromness in the Orkney Islands, and finishes in Leith, Edinburgh. All inclusive cruise-only fares start from US$5,781* per person, double occupancy.

And between 1 June and 28 August 2009 Prince Albert II will embark on a series of expeditions of 7 to 16 days to the Arctic regions of Norway, Iceland, Greenland and Canada. A 7 day round-trip Expedition Svalbard voyage will meander through the spectacular archipelago of Svalbard, where guests may be lucky enough to encounter seals, Arctic foxes, unusual bird species and even polar bears. All inclusive cruise-only fares start from US$3,146* per person, double occupancy.

Alternatively, guests can choose longer expeditions of up to 16 days including an Explorer's Arctic voyage from Hamburg to Longyearbyen; a Far Side of Svalbard journey from Longyearbyen to Tromso; a Frozen Worlds expedition from Tromso to Kangerlussuaq, or an Exploring the Canadian Arctic adventure from Kangerlussuaq to Halifax.

Prince Albert II's itineraries are unstructured by design, allowing the ship to stay longer on sites of particular interest, or make detours whenever weather, nature or mere curiosity dictates. Silversea's team of naturalists and special guest lecturers are on hand throughout the voyages to share the secrets of the pristine environment and a fleet of eight Zodiac boats takes guests up close to where the action is.

The 132-guest vessel is a truly luxurious base from which to explore some of the wildest and most remote destinations in the world. Silversea's all-inclusive fare includes accommodation in sumptuous ocean-view suites, complimentary wines and drinks throughout the ship (even hot rum toddies in the Arctic), gourmet dining, fascinating shipboard lectures and all gratuities.

*Port and fuel charges, government fees and taxes are additional. Subject to availability, terms and conditions.

Silversea Cruises is recognised as an innovator in the luxury segment, offering guests large-ship amenities aboard four intimate vessels, Silver Cloud, Silver Wind, Silver Shadow, and Silver Whisper, all designed to offer an atmosphere of conviviality and casual elegance.  With the addition of the regal expedition ship Prince Albert II in 2008, the company's itineraries encompass all seven continents. Silversea has recently entered Luxury Travel & Style Magazine's Platinum Hall of Fame, having been named Best Cruise Line by Australian readers for the past five consecutive years. For two consecutive years Silversea has been named 'Best Luxury Cruise Line' in the TravelWeekly Asia Awards and for nine consecutive years "Number One Small Ship Line" in the Readers' Choice survey conducted by Condé Nast Traveler magazine in the USA. In 2007 Silversea was the only cruise line named in the UK edition of Condé Nast Traveller's "Top 100 Luxury Travel Experiences", at the same time topping the Small Cruise Line award for the eighth time. Silversea has been selected as "World's Best Small-Ship Cruise Line" seven times in the Travel + Leisure (USA) readers' poll and was rated Number-One luxury cruise line by high-net-worth consumers in the 2008 Luxury Brand Status Index.

Email ThisBlogThis!Share to TwitterShare to FacebookShare to Pinterest
Labels: Silversea