Cruise Weekly: Aboard Spirit of '98 on the Columbia River 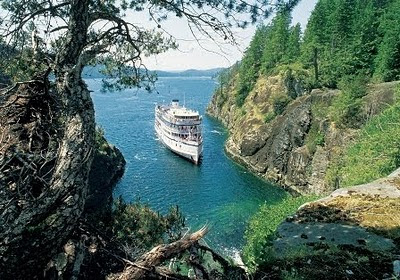 Astute readers of this column will recall some months ago I introduced the US-based adventure cruise company, Cruise West. Many readers have cruised with them too, probably in Alaska, the most popular itinerary among Australians.

Now I have the chance to sample the product firsthand and have the pleasure to report from aboard Spirit of ’98 as we cruise upstream east from Portland Oregon along the mighty Columbia River, into the wild mountainous country along the Washington State border.

Only three days into an eight night voyage, this report may be somewhat premature, but I’m already getting a feel for the ethos of this company which operates under the tagline; ‘Up close, casual and personal’.

Marcy and Kate, two highly experienced nature guides, take charge of the education, filling us in on everything from migrating salmon, hydro-electric power generation, native American heritage and European exploration, most of which is centred around the intrepid pair, Lewis and Clarke.

Our passengers on this itinerary are exclusively Americans and predominantly retired folks, but that doesn’t dissuade anyone from getting out and about. Day one was confined to the lower reaches of the Columbia around Portland and the township of Vancouver (not to be confused with BC) on the other bank. Heavy industry, including the former liberty shipyards of WWII, dominates this region.

But soon mighty basalt cliffs and the distant Mt Hood herald a landscape akin to Alaska with vast tracts of pine and timber bordering the huge waterway. The Columbia is no babbling brook; oceangoing vessels including US Navy warships regularly visit Portland, 100 miles from the Pacific coast.

Spirit of ’98, recently relocated from Alaska, is our home for these seven nights. One of Cruise West’s fleet of eight vessels, she is built to an early 20th Century theme recalling the graceful coastal steamers of the pioneer era. So convincing, she landed a part in the Kevin Costner classic, Wyatt Earp. Built in 1984, her passenger capacity is 96; ideal for the expedition task. Interior fit-out is classic wood and brass with a convincing turn-of-the-(last) century feel.

Ahead lays the Wild West town of Pendleton, famed as much for its illicit underground culture as its respected wool and trade profile. Beyond that, the Tamastslikt Cultural Center is one of the few native American interpretive centres in this region and the much-anticipated jetboat ride up Hells Canyon sounds exhilarating. Like so many comparable adventure itineraries, I’m free to be as active or docile as I like. Already I’ve climbed a one mile upward trek to the top of Multnomah Falls and explored the cavernous interior of the Bonneville Dam hydro-electric plant and ingenious salmon bypass.

River cruise or interior expedition, call it what you will, I’m learning stacks about this region and its natural and human history in an intimate, uncrowded manner that truly defines adventure cruising. If this is a sampler, I hope to report on many more Cruise West itineraries from around the Pacific and beyond.

Further information on Cruise West products at your travel agent or at www.cruisewest.com