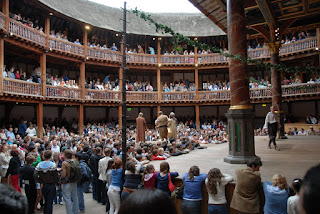 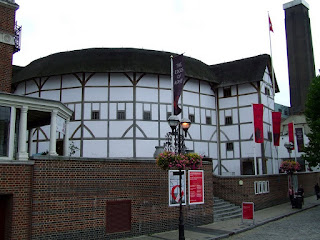 CLOSE to a million people a year visit the replica of Shakespeare's old Globe Theatre in London's Thames-side Southwark, either to just gawk or to take-in a performance.

Probably only a few ever ponder its history, one that's as contorted as anything the Bard himself could have penned – and he was certainly no slouch when it came to matters of intrigue.

That history goes back nearly four-and-a-half centuries to 1576 when the forerunner to the original Globe Theatre was built in nearby Shoreditch by actor-entrepreneur James Burbage, who uninspiringly for an actor simply called it the Theatre.

Shakespeare was one of its early troupe of resident actors called The Chamberlain's (later The King's) Men; the Theatre flourished for twenty years until Burbage died in 1597, and the owner of the site grabbed it in lieu of alleged unpaid land rent.

The King's Men moved to another playhouse, and between Christmas and New Year's Eve 1598, doubtless fuelled by voluminous good cheer and with the landowner at his up-country estate, moved-in and demolished the Theatre.

They stored the pieces for a year before rebuilding it in Southwark as The Globe, with the deceased Burbage's sons selling shares in the new enterprise: Shakespeare who was now both a writer and actor for The Globe, bought 12.5%.

Actors had an enormous work-load, some memorising 5000 lines covering thirty parts for a different play for every day of the week, except Sundays, Christmas and Lent which they got off.

And as most of the public at the time could neither read nor write, a black flag would fly over the roof of The Globe signifying a tragedy was being performed that day, a white flag for a comedy, and a red one for an historical play.

Then during a performance of Shakespeare's Henry the Eighth in 1613 the audience got more for their entry Penny than they'd expected: a stage cannon set fire to the thatch roof, and The Globe burned to the ground.

A replacement theatre was built on the site, but soon after England's Puritan Parliament ordered its demolition and its foundations buried to remove all traces of The Globe, slamming it as "a very great annoyance to noblemen and gentlemen, with all manner of vagrants and lewd persons attending, and with drums and trumpets greatly disturbing ministers and parishioners at Divine Service."

It appeared The Globe theatre had finally succumbed forever, but fast-forward 300-years to the 1960s, and not to an Englishman but to an American Shakespearean actor and movie director, Sam Wanamaker who embarked on a twenty year campaign to have a new Globe Theatre rise in London.

Wanamaker's research put the foundations of The Globe under a derelict brewery, warehouse and row of brothels ear-marked by the London Council for demolition.

But the Council had little interest in Wanamaker's idea of a new Globe rising on the historic site, preferring instead a slab of concrete the size of a football field for a garbage recycling plant.

Wanamaker persevered with his campaign to have the Council reverse its decision, and during this time found parts of the original Globe Theatre under an adjacent Heritage listed house – which the Council again put off-limits to him because of its Heritage listing.

Eventually he won his fight with a new Council giving the go-ahead for the new Globe Theatre, rather than a recycling plant, to rise 230-metres from the original; sadly Wanamaker died four years before the Queen officially opened it in 1997.

And like the original, the remarkable 'O' shaped building is made of oak without a single bolt or nail in it, everything instead being mortised and dowelled, with walls of original-style lime plaster over oak lathe-and-staff, and  a thatch roof.

The stage extends from the rear of the 'O' with a pit area before it in which "groundlings" (dubbed "stinkards" on hot days in Shakespeare's time) stand during performances, while there are also three levels of seating galleries.

But the new theatre holds only 1700 compared with the original's 3000; regular tours include a Shakespeare Exhibition, a history of the original Globe, and another of the infamous inns, 'stews' (brothels,) bear-baiting and pit-dog fighting arenas that once surrounded it.

Travel agents can include tours or performances in UK packages. www.shakespeares-globe.org


[] THE new Globe Theatre: a garbage recycling plant had been planned on the historic site amid London suburbia.

[] A SHAKESPEAREAN performance inside the new Globe.