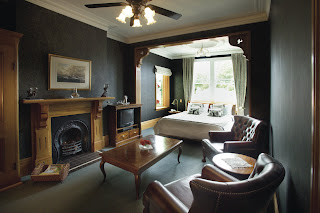 Students of New Zealand's one-time Miss Gibson's Private School for Girls would have trouble coming to grips today with the new-found life of their old alma mater.

For rooms in which six, eight or even more young ladies of the rural well-to-do of New Zealand's South Island once crammed into to sleep, are now individual suites for guests in the plush and re-named Charlotte Jane Boutique Hotel.

And no more are there the communal toilets and showers that would run cold after the first few pupils drained them on shivering winter's mornings; in their place are now vast walk-around ensuites serving each luxury air-conditioned suite.

And gone too are the school-day dining routines that forbade anything but the devouring of meals in strict and stoney silence: In their place today is dining of grand proportions, with 5-star gourmet cuisine shared at a leisurely pace over suitably talkative reds and whites from the best of New Zealand's vineyards and others around the world.

The story of Miss Gibsons Private School for Girls and the 5-star Charlotte Jane Boutique Hotel provides a wonderful step back in time in the history of Christchurch, a time in the 1880s when an Englishman, Captain Frederick Gibson and his wife Mary settled with their family at Lyttleton outside Christchurch where he took up the position of Port Officer.

As the family grew to ten children, the Gibsons moved to a more spacious block, and with 640-pounds given by their two elder school-teacher daughters, built a large and rambling home, part of which they turned into Miss Gibson's Private School for Girls.

In 1891 eight students were enrolled. This quickly doubled, then trebled and by 1922 with nearly 70 pupils – and classes often having to be held outdoors – the Gibsons decided to relocate to a new site at Christchurch's Merivale that their now-historic buildings still occupy today.

Around the mid-1920s Captain Gibson, a stickler for good manners, became increasingly liverish about the name of his school being referred to colloquially as "Gibbies," and called on an old friend, the once-feared Maori warrior Paoro Taki to ponder a more suitable, traditional Maori moniker.

Paoro Taki thought about it for a while and came up with Rangi-Ruru – meaning Wide Sky Shelter – and as the school continued to grow it moved yet again.

The Gibsons sold the newly-located Rangi-Ruru (that today is one of New Zealand's leading church schools,) and with their family growing up and moving away, also moved out of their home-cum-schoolhouse, and the twin-buildings became a womens' refuge, and then flats and finally abandoned.

Then in the mid-1990s Moira and Siegfried Lindlbauer discovered the still-hauntingly gracious buildings and set their hearts to turning them into a fine guest house. Moira, from Singapore and Siegfried from Germany, spent two years  ripping out make-shift walls, tearing-down tacked-on classrooms – and  discovering priceless, century-old handcarved Kauri and Rimu timber-work from which they painstakingly removed coat upon coat of garish green and pink paint.

They also found in every room intricate cast-iron fireplaces that had been boarded up… and behind cupboards, old newspapers and postcards sent from holidaying students to their teachers.

In 1997 the Lindlbauer's opened Charlotte Jane Guest House (named after one of the first ships to sail from England to Christchurch in 1850,) offering twelve vast guest rooms, each with a gas fire, walk-around ensuites, furnishings of recycled rare timbers, and most with views over the landscaped gardens.

And a tradition of fine dining that continues to this day: gone are the Gibson girls' breakfasts of porridge and toast and tea, replaced with fresh fruits and cereals, warm breads and croissants, fruit juices, eggs and bacon and lamb cutlets and grilled tomatoes…

Gone too are the girls' night meals of mutton chop stews, cold silverside and slabs of bread – and in their place such choices as prawns marinated with Moroccan herbs on a bed of tabbouleh, goat cheese soufflé with red pepper coulis, Canterbury lamb shanks on sweet potato and carrot mash with Cognac peppercorn jus, beef Bearnaise, Grand Marnier crème brulee with almond biscotti, sticky date pudding with vanilla bean ice-cream…

[] CLASS OF ITS OWN – the one-time Miss Gibson's School for Girls, now a 5-star boutique hotel

[] SUITE LIFE in one of the hotel's luxury suites