A New Concept in World Cruising 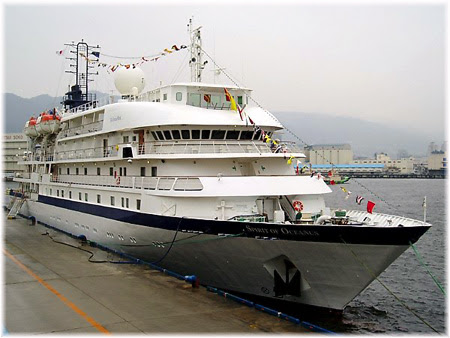 Ten days ago, Cruise West announced a new cruising concept that will see its Spirit of Oceanus follow in the wake of the Stella Polaris, that for so many years cruised the world in luxury carrying no more than 199 guests. Now, the similar-sized Spirit of Oceanus will start a 335-day circumnavigation in March 2010 carrying just 114 guests.

While most world cruises typically leave in the first week of January, Princess is also experimenting with cruises that leave outside the usual sailing dates and have a 104-day world cruise planned for the Dawn Princess, for example, leaving Sydney in an eastbound direction on July 5. [Spirit of Oceanus]

Seabourn will also conduct its first world cruise, a 108-day affair, leaving on January 5 next year, after they take delivery this month of their new 450-guest Seabourn Odyssey. But unless one considers the privately-owned suites on board The World of Residensea to be the equivalent of a cruise ship, no one is doing what Cruise West is doing, taking almost a year to circumnavigate the Earth."
Posted by rodeime