Struth! Across the Pacific by Tin Can 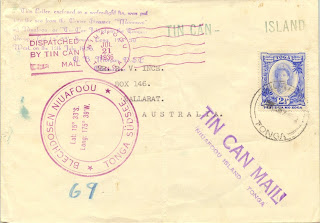 IN his continuing search for the more weird, whacky and wonderous in the world of travel, DAVID ELLIS says the tiny South Pacific island of Niuafo'ou in Tonga is also known as Tin Can Island.

Its because Niuafo'ou has no harbour and no wharf, and in early days of European visitation and settlement, during bad weather passenger and cargo ships would give it a miss as there was no way of either landing or picking up freight or passengers.

But because mail was so important to the tiny community – there are still only around 650 people live there today – an ingenious local storekeeper came up with the idea of getting mail out to ships in bad weather by using old tin cans in which biscuits had earlier been delivered to his grocery store.

He put the mail inside the tins, soldered them up so they were watertight… and had a powerful local swim them on a floating pole out to ships standing in rough seas off the island.

Ship's captains refilled the tins with the mail for Niuafo'ou, and the habit quickly became known as Tin Can Mail; a local postmaster later convinced the Tongan government to print special Tin Can Mail stamps for the island, and these are still used today and treasured by stamp collectors around the world.

Our pic shows a postcard mailed from the island in 1936 with the official Post Office cancellation DISPATCHED BY TIN CAN MAIL.