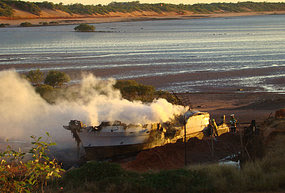 FIRE has destroyed a $2.3 million luxury cruise liner in the West Australian town of Broome.

The fire was reported about 11.30pm (WST) yesterday and was still burning late this morning.

Police spokeswoman Ros Weatherall said it was believed no one was aboard the boat.

The Kimberley Quest, a 24.9m fiberglass vessel built in 2000, had been in port at the Broome slipway undergoing repairs.

Ms Weatherall said two arson squad detectives were on their way from Perth to investigate the cause of the blaze.

"Because it is still burning, no one has been able to get too close to the boat,'' Ms Weatherall said.

"Hopefully the fire will be out soon and police can take a closer look at it.''

The boat's owners have asked police to clarify that the destroyed vessel was not the Kimberley Quest II, which is currently cruising the Talbot Bay area with 18 people on board.
Posted by rodeime