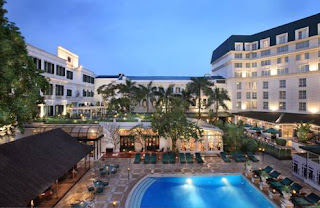 WINNER IN the HERITAGE CATEGORY

The Sofitel Legend Metropole will glitter again at the PATA Gold Awards 2010 ceremony, taking place on 17th September in Macau, when it accepts a prestigious gold award in the Heritage category.

The award lauds the hotel for its refurbishment of one of Southeast Asia's most treasured properties. Sofitel relaunched the Metropole in 2009 as the hotel group's first Legend property.

"The challenge for any hotel in the Heritage category is achievement of a very delicate balance between celebration of historical charm, and satisfaction of tomorrow's expectation," said Kai Speth, General Manager of the Sofitel Legend Metropole Hanoi. "Where so many hotels are only thinking about today and tomorrow, we have an obligation to think about today, tomorrow and yesterday. The PATA Award persuades us that we're on the right track."

The legendary Metropole's refurbishment maintained the original architecture since 1901, enhanced with the development of new facilities, the creation of themed suites and a range of guest's experience according to the way of living heritage within the spirit of centennial establishment. The restoration began in 2004 and was revealed as a "fait accompli" last year with the Legend launch.

The new facilities at the Metropole include, Angelina, a chic Italian restaurant that raised the bar on sophisticated nightlife in Hanoi. The hotel also opened Le Spa du Metropole last year. Remarkably, this was the first spa to be opened in the hotel's 108-year history.

The Metropole's themed suites indulge the property's connections to legendary people like Charlie Chaplin, Somerset Maugham and Graham Greene, each of whom stayed at the hotel. Located in the historic, 1901-built wing, each of these suites is imbued with colonial-era aesthetics.

"When you're in the Graham Greene suite, it's not that difficult to imagine him sitting here, churning out the 500 words he was reputed to do every day like clockwork," said Speth. "Being able to imagine that – to fall into that time warp, if you will — is exactly the kind of spell we're trying to cast." Kai added.