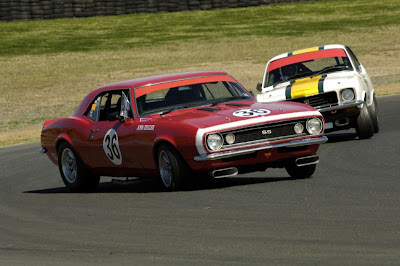 Sydney's Eastern Creek Raceway will once again play host to Australia's largest gathering of racing muscle cars from as early as the 1960s - Muscle Car Masters.

Muscle Car Masters is a celebration of Australia's rich motoring heritage and a tribute to the drivers who raced.

The event will feature a one-off 50th Anniversary handicap race that will see the best muscle cars from the 1960s, '70s, '80s and '90s pitted against each other in a race to settle the old argument - just what era of racing was the best?

Chief executive of the Australian Racing Drivers Club (ARDC) and Eastern Creek Raceway Glenn Matthews said this year's Muscle Car Masters would be the biggest yet.

"Each year the event attracts more competitors, exhibitors and most importantly fans.

"Muscle Car Masters is a motor racing event for all ages - giving Dads an opportunity to relive the racing of old and introduce it to their sons," said Mr Matthews.

"Muscle Car Masters prides itself on offering something for everyone, be it a racing fan, car enthusiast or an owner who wishes to show off their pride and joy," Mr Matthews said.

Other events scheduled for Father's Day recreate the traditional battles of old as Ford Falcon GT-HOs compete against arch rivals in the form of Holden's Monaro, XU1 Torana and the Valiant R/T Charger.

Further racing will include the Touring Car Masters, Group C and Group A Bathurst Touring Cars and Historic Touring Cars from the 1960s and '70s.

Tickets are available at the gate. For further information visit www.musclecarmasters.com.au