FROM ROGUES TO RAJAHS, THE LIFE OF SEAN 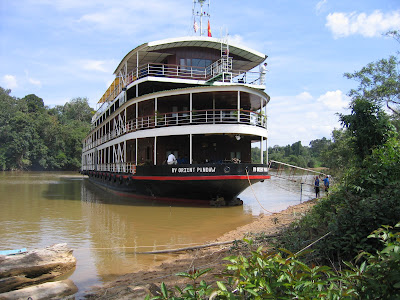 TALKING to Sean Whalley makes you feel like you've somehow stepped into the pages of Boys Own Annual. 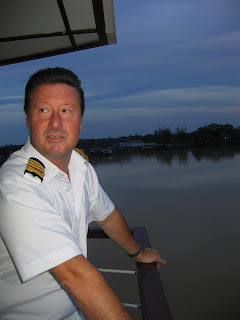 If he's not got you gripped with yarns of arresting rogue fishermen in gale-lashed waters off the Falkland Islands, or helping in rescues of distressed yachtsmen in equally foul Atlantic conditions, he's recounting rubbing shoulders with the likes of John Mills, Michael Caine or Rod Stewart in more salubrious surrounds aboard QE2 in the sunny Mediterranean or the balmy Azores.

Or his latest stint: taking the first cruise ship in a near seven-decades into the jungled heartland of Borneo where the few tourists who go there out of curiosity, find that they themselves are the curiosity – for the locals.

And he'll tell you about drinking home-made rice-wine with the chief of a traditional long-house from whose ceiling hangs a basket of human skulls... trophies of the chief's father's father, and his father before that, who chose poison-tipped darts from blowpipes as their weapons of choice.

And of the English Brooke family, the White Rajahs of Borneo for a hundred years from 1841 – and their still-standing riverside forts from which they put down tribal skirmishes and rounded-up headhunters and pirates as they ruled an area of 100,000 square kilometres, before finally handing-over the place to Britain in 1946.

It's a long way from the little English market-town of Crediton where this adventurer's dad was the local dentist, and whose love of yachting was inherited in formative years by the young Sean. 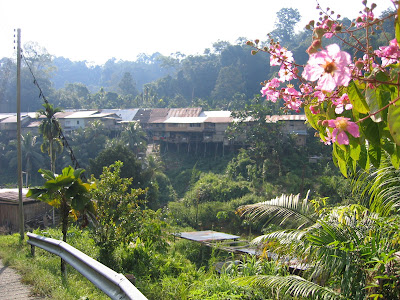 Determined to make his way to the top in a career at sea, Sean Whalley took- on any job from the rough-and-tumble of off-shore oil-rig support vessels, to officer rank aboard freighters, Chief Officer on the boutique cruiser Sea Goddess I (now the world's highest-rated SeaDream I,) and eventually Chief Officer aboard QE2.

And It was during fifty-odd crossings of the Atlantic aboard QE2 and countless voyages to fairy-tale destinations that Sean shared cocktails with John Mills, Gene Hackman, Michael Caine, Rod Steward, Barbara Windsor (the busty blonde bimbo in Britain's Carry On movies,) and Scottish footballer Kenny Dalgleish.

But itching for something more adventurous, a few years back he took on the challenging job of master of the Falkland Islands' 800 tonne Fisheries Patrol Boat that protects its 200-mile (322km) Fisheries Conservation Zone from poachers.

With a crew of fifteen and two Fisheries Inspectors, Captain Whalley spends days at sea intercepting foreign fishing boats – mostly Korean and Spanish –  fishing the Zone for hake (a popular large commercial white-fleshed fish) and squid for processing into calamari.

Despite gales that could spring up every few days, his crew take to the foaming seas in rigid inflatables from their patrol boat to board these foreign fishers to check their papers – arresting those ships whose owners have not paid their licence fees and escorting them back to Port Stanley where they're  impounded until hefty fines were paid.

And many a time he's been brought-in to help in rescues of yachtsmen from their floundering vessels, and on two occasions the crews of cargo ships that had caught fire at sea.

When his patrol boat was put in for a 5-months refit earlier this year, the itchy-footed Sean wasn't one to just sit around, and snapped-up an offer to skipper the first cruise vessel since 1942 to ply the Rajang River from Sibu in Sarawak into the heartland of Borneo.

Owned by Pandaw River Cruises, the 30-cabin Orient Pandaw is an exact replica – augmented with today's luxury mod-cons – of the historic riverboats of the Irrawaddy Flotilla Company that had 650 ships on the rivers of South East Asia from 1865 to 1942; it burned them all to the waterline to stop the Japanese using them to move troops and supplies after Japan invaded the region in 1942.

The Orient Pandaw travels 250km up the rainforest-clad Rajang River, in 9-days visiting small towns and frontier outposts yet to come out of the 20th century; there are jungle treks, views of the wildest rapids in the country, visits to a longhouse and local schools, a Brooke Raj fort, tropical fruit plantations and more.

[] HOME of one-time headhunters, a traditional longhouse deep in the jungles of Borneo now welcomes tourists from Orient Pandaw