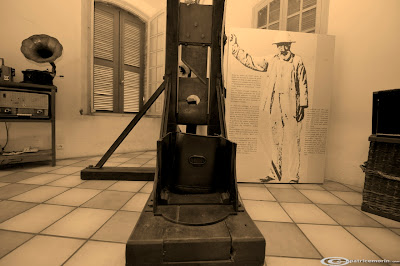 IF it was any consolation to those French deportees foolhardy enough to misbehave so badly in the one-time penal colony of New Caledonia as to warrant execution, it was that they went to their deaths on one of the most famous guillotines in French history.

Because when it became obvious to the commandant of the prison just outside Noumea that a few of his confinees were more fractious than he had been led to believe, he sent word to Paris asking permission to implement capital punishment upon the worst offenders.

And Paris obliged by delving into its prison armoury and despatching by the next convict sailing ship, the guillotine that had been used in 1793 to execute both Louis XVI and his queen, Marie Antoinette during the French Revolution... just four years, incidentally, after the contraption was refined by the French doctor, Joseph Guillotin.

Many people believe that it was Dr Guillotin who invented the guillotine, but in fact it had been around in various guises since the 14th century, and in England from the 15th century was known as the "Scottish Maiden."

Dr Guillotin was both a medical doctor and lawmaker, and believing that the guillotine was the "most humane" method of execution, was able to convince the government in 1791 to introduce "humane mechanical execution" using the device.

A fellow named Antoine Louis was engaged to build the prototype of Dr Guillotin's refined contraption, and in turn hired German-born Tobias Schmidt to actually build it – believing that Schimdt was ideally suited to this as he was a renowned harpsichord maker.

And some 90-odd years on it must have been a very sobering six-month's journey for those on board that convict ship to New Caledonia as they pondered every day the guillotine lashed to the aft deck... 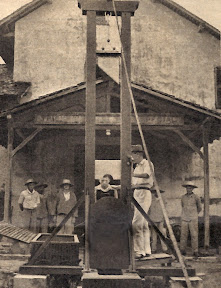 Just how many convicts fell victim to that guillotine is in somewhat of dispute: official records say a total 27 convicts were executed by guillotine, but just before his death one executioner claimed that he alone had beheaded 74 miscreants.

Whatever the true figure, it was a minuscule proportion of the 18,000 hardened criminals, petty thieves, minor other crooks and political deportees who were transported on thirty-three convoys between 1864 and 1897.

And in their typically meticulous way, the French didn't send just any old rabble on their earliest convoys to New Caledonia: the very first were made up of tradesmen convicts who could build their own stone and timber prison, and the next were those able to read and write and who could work in the prison's and other government offices.

Then came those with agricultural skills who could run farms to feed the growing penal settlement, and after them, anyone France simply wanted to be rid of.

And when sentenced to a future on the other side of the world (and hardly considered a South Pacific holiday playground in those days,) convicts did not only their "time" but had to remain in the colony for an equal number of years as "free men and women."

It was a system that worked very well for France, as most prisoners on their release quickly found work, married and had little reason to bother about returning home. And they quickly established a solid community of largely law-abiding settlers in the sun and freedom outside the prison walls.

The last convicts arrived in New Caledonia from France in 1897, and although the gaol was officially closed in 1914, one long-term deportee with papers marked by the court "Never To Be Released" was shipped to another of France's penal colonies in Guyana in Africa.

The guillotine was moved to a new prison and last used in the 1940s. It is now dislayed in a museum at Bourail 150km north of Noumea. The museum has an interesting collection of photos, documents, work tools, and household and personal items of one-time convicts and prison staff.

[The Hotel Le Lagon Noumea has a current special of stay 4-nights/pay 3-nights including full buffet breakfast on three mornings and a free half-hour massage per person; see travel agents for fly/stay packages available until December 20 if booked by July 31. The hotel has a heated pool, shallow kids pool, two spas and gym with sauna and fitness instructor.]

[] THE guillotine used to deal out justice in New Caledonia up until the 1940s is on display at the Bourail Museum.

[] OLD wares at the Bourail Museum just north of Noumea