IS THIS HOW CAPTAIN COOK REALLY DIED? 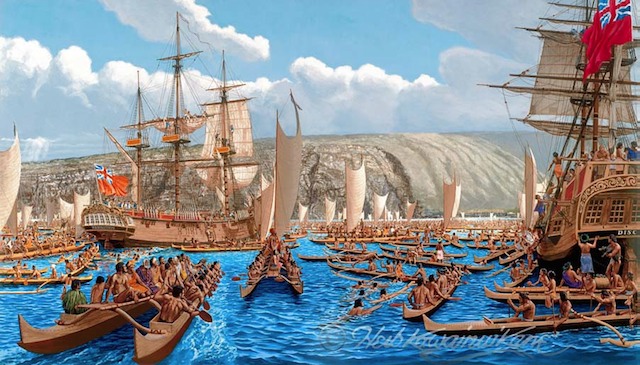 THE way that the death of Captain James Cook in the Hawaiian Islands has been taught to not only our children, but to others in schools around the world, is now being claimed as an extraordinary and deliberate distortion of the truth.

And the man fighting hardest to set the record straight is a native Hawaiian who has been conducting a war of words over the issue for a decade or more.

Herb Kawainui Kane is a respected artist-historian who has been honoured as a Living Treasure of Hawaii for his artistic interpretation of the islands' history.

And he says that the popular version of Cook having been sacrificed by heathen Hawaiian priests is garbage… and he is always ready to talk about the real events to the many Australians who make the trek to Kealakekua Bay on the Big Island of Hawaii to see the very spot where the heroic Cook died.

Unfortunately many don't make it to the monument that marks this spot: it is a tough three-hour trek via an overgrown jungle path. And while you can get there more easily by boat, to do so you also have to pay for a day's scuba diving as well, like it or not.

So many Australian visitors heading for Kealakekua Bay get only as far as the nearby town of Captain Cook and its Captain Cook Coffee Company, buy coffee and Cook-inspired T-shirts, and go off sightseeing elsewhere.

Or if they're lucky, bump into Herb Kane who lives just outside town.

"Many of his crew were weak from tuberculosis and venereal disease," Kane tells Aussie visitors. "And Cook was no longer the humane and diplomatic leader of his earlier voyages. Often his temper erupted in foot-stamping tantrums that his men called 'heivas' – because they resembled the energetic Tahitian dance."

(In recent years British experts have explained this as symptomatic of a vitamin B deficiency, probably caused by intestinal worms.)

Cook had first visited Hawaii, then known as the Sandwich Islands, in 1778 on his way to Alaska in search of the fabled North West Passage. On his way back south he arrived at Kealakekua Bay at the time of Makahiki, an annual festival honouring the Land God, Lono.

Because Cook's ship with its masts, spas and sails resembled the tall pole, cross-piece and white banner of Lono carried during the festival, historians for years have argued that the islanders believed Cook – when he stepped ashore – was Lono reincarnated, and revered him as a living god.

But when they realised their mistake, to save face and prove that Cook was only mortal, the island's chiefs ritualistically sacrificed him.

But Herb Kane says: "Rubbish. Cook was never regarded as a god, and on this visit was greeted with all the respect due to a visiting chief."

Later, however, when Cook was readying to sail on, his sailors went ashore for firewood, and according to Kane's research, pulled down a wooden fence enclosing part of a temple's altar and sacred images – a desecration that gave great offence to the islanders.

"Cook is known to have been seen gesturing from shore toward his ship's longboats, and a legend has grown that Cook, the humanitarian, was signalling to his men to stop firing their muskets.

"But would a commander order a cease-fire in the midst of a desperate fight for his life and that of his men? More likely he was waving for urgent rescue, for like most sailors of his time, he could not swim.

"Before that rescue came, he was clubbed from behind and stabbed to death."

Kane says the British created their version of Cook's ritualistic death to make him a hero in public eyes. "There was no mention of the desecration of the temple," he says.

Herb Kane has recorded Cook's visits to Hawaii in ten paintings in his book, Voyages which details the myths, legends and historical events of his nation.

"I have a great admiration for Cook," he says. "It's important for our children that his real story be known."