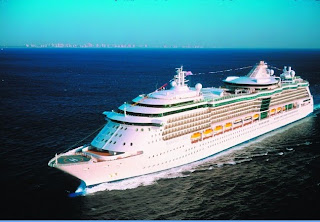 A 12-NIGHT coach tour from San Francisco to San Diego in May next year has been uniquely coupled by ecruising.travel with 12-nights cruising from San Diego to Alaska and Vancouver aboard the 90,000 tonne, 5-star Radiance of the Seas.

This two-in-one holiday brings with it attractions as diverse as Alcatraz Prison, the Napa Valley, Beverley Hills, Rodeo Drive, an historic Californian mission and San Diego Zoo, followed by Radiance of the Seas' cruise to San Francisco, and then Alaska's Ketchikan, Juneau, Skagway, a cruise by Hubbard Glacier, Sitka, and then a day in Nanaimo in British Columbia, and Vancouver where there are two nights at a waterfront hotel.

And the whole 24-night package including return air and taxes from Sydney and services of a Tour Director throughout the 12-nights of coach sightseeing, is available from $6,990pp twin-share.

For a fully-detailed itinerary, phone 1300 369 848 or visit www.ecruising.travel

THIS unusual cruise-tour begins on May 5 2011 with two nights in San Francisco including a full-day touring the Bay area, followed by a visit to Alcatraz, two nights in the Napa Valley's Wine Country, two wine tastings, a Champagne Brunch and a hot air balloon ride, two nights in Monterey and famous Carmel-by-the-Sea, and two nights in Beverley Hills including sightseeing Rodeo Drive, Hollywood and Grauman's Chinese Theatre.

The tour goes on to San Diego for two nights with visits to the circa-1776 San Juan Capistrano Mission including a Docent-led tour, and San Diego Zoo before joining Radiance of the Seas' cruise to San Francisco, Alaska's Ketchikan, Juneau, Skagway, the cruise by Hubbard Glacier, Sitka, Nanaimo in British Columbia, and Vancouver where there are two nights at a waterfront hotel.