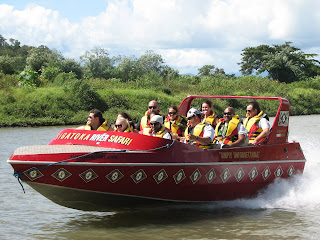 Australian, Jay Whyte is quickly proving he knows what Australian's want to see when they visit Fiji adding a fourth jet boat to his award winning Sigatoka River Safari to accommodate growing passengers.

The popular Sigatoka River Safari, which takes passengers along the Sigatoka River in custom built safari jet boats and visits authentic Fijian villages to allow guests the opportunity to experience a day in the life of the real 'kaiviti' (Fijian), has experienced such substantial growth since its beginnings in 2006 that it has added three additional jet boats in this time.

With the arrival of Davujukia, Sigatoka River Safari can accommodate a total of 54 passengers on each of its morning and afternoon tours, with the fourth jet boat adding a further 19 passengers per tour.

"I have been amazed by the growth of Sigatoka River Safari over the past four years. Numbers from the beginning of 2010 have increased by 20% in comparison to the same time period in 2009. Getting our fourth jet boat, Davujukia means that we can now really cope with passenger demand and hopefully continue to grow the business." Explains Mr Whyte.

Sigatoka River Safari was the dream of a 13 year old Australian boy, Jay Whyte. Jay's dream began after meeting Fijian, Pita Matasau in 1991 at the resort he and his family were staying at. After becoming firm friends Pita took Jay and his family to see his village of Draiba, deep in the Fijian interior. From this amazing opportunity Jay decided everyone should be able to see this part of Fiji and the idea for Sigatoka River Safari was born.

Fast Forward to 2004 and Jay followed his Sigatoka River Safari dream and began developing his ideas. In 2006 Fiji's Sigatoka River Safari began operating tours and by 2008 it had already won two AON Excellence in Tourism Awards – the first for Best Adventure Tour in 2007 and the second award was for Best Fiji Experience in 2008.

The Sigatoka River Safari adventure starts from the minute passengers depart Sigatoka Town and embark on a spectacular 10 mile journey through the picturesque Sigatoka Valley, or fertile "salad bowl" of Fiji as it is called by locals, to the jet boat departure point.

After a short stroll thorough the Fijian jungle, passengers board the safari jet boats and head up Fiji's longest river into the beautiful highlands. Passengers learn about the amazing history of Fiji, the Sigatoka Valley and the ways in which the river was and still is used today.

Sigatoka River Safari works with 14 different villages and visits a different village every day, to minimise the impact of tourism on the village lifestyle, a key element in their success to date.

Prices include transfers to and from resorts, a 4.5 hr safari tour, tropical lunch in a Fijian village, a contribution to your village, complimentary safari Sulu and a 10% shopping discount at Tappoos.