END IS NIGH FOR THE FUTURE… 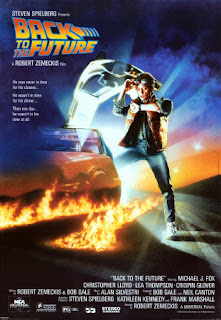 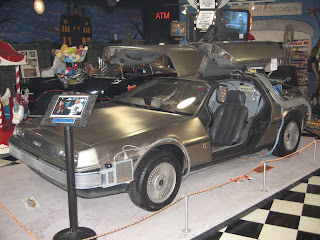 END IS NIGH FOR THE FUTURE…

MORE people have hopped aboard it in fourteen years than three times
Australia's population, and while they've thought they've flown over
towns, plunged into icy caverns, found themselves in dormant
volcanoes, zoomed through ancient valleys and dropped over terrifying
cliffs, in all that time each has in fact travelled no more than just
three metres.

And its been done in neither trains, planes, ships nor automobiles,
but aboard the Back to the Future ride at Universal Studios in
Hollywood, the entertainment park's first-ever high-tech ride that
opened in June 1993.

But now after 826,500 hours of thrilling, elating, or just plain
terrifying over 61-million riders, Back to the Future will plummet
down its last waterfall and park for good in the present next Monday –
America's Labor Day Long Weekend.

The ride involves a dozen eight-person units built to look like the
futuristic, gull-wing De Lorean autos that featured in Universal Film
Studio's Back to the Future trilogy, and to mark the ride's
association with the cars, one lucky visitor on the final day of the
ride will find themselves probably even more wobbly-kneed after they
alight.

That's because they'll be given the keys to drive away in their own
historic 1981 De Lorean, one of just 9000 hand-built in 1981-82, and
which has been the subject of much drooling and envy as a display
piece next to the thrill ride for the past few years.

The original Back to the Future ride was launched at Universal Studios
in Florida in 1991, but was closed without fanfare in March of this
year because of waning public interest.

And although the Hollywood ride did not suffer the same fate,
Universal decided that after fifteen years it was time to literally
look back to the future, close last-century's thrill-ride, and replace
it with a more up-to-date heart-thumper in early 2008.

The new one, that's yet to be named, will be based on the animated
sitcom The Simpsons.

A 21-metre high, twin-screen IMAX theatre was built at Universal
Studios to house Back to the Future, with creative input for the ride
and the IMAX film sequences from Steven Spielberg who produced the
Back to the Future trilogy; when the ride opened in 1993, there was so
much demand that for the first few weeks Universal had to open its
gates at 7am and stay open to midnight to handle the crowds.

And despite the bronco-bucking action that involves
3-minutes-45-seconds of pitching, rolling, and surging, the twelve De
Lorean look-alike ride-vehicles "travel" up, down, forwards, backwards
and sideways, less than three metres.

But that's enough for white-knuckled passengers to become part of the
exploits of the main characters of the trilogy, Doc Emmett Brown of
the Institute of Future Technology, and the run-amok Biff Tannen.

This includes such typically-bizarre Spielberg events as a high-speed
chase through a futuristic town, flying at virtual ground level at
terrifying speed over valleys and towns, crashing through flashing
neon signs, plunging into an icy cavern, escaping an avalanche,
plummeting down a waterfall, ploughing into a dormant volcano,
confronting car-swallowing dinosaurs and being spewed out again, and
riding a lava flow…

One hopes that for thrill-seekers having to wait until the next
northern Spring for their replacement fix, the new Simpsons Ride can
live up to what they've become used to with Back to the Future.

FOOTNOTE: As we don't have the wisdom of Spielberg to help us look
into the future, we thought we'd take you Back to the Past and what
was going on in the world in 1993, when Back to the Future opened.

. Bill Clinton was President of the USA

. Sydney was selected to host the 2000 Olympics

. TV's Sam Malone closed the doors of Cheers Bar for the last time

. Czechoslovakia split into the Czech and Slovak Republics

. The Brisbane Broncos beat the St George Dragons to take the NSWRL

. The Essendon Bombers defeated the Carlton Blues to win the AFL

PHOTO CAPTIONS: THE De Lorean that featured in the Back to the Future

film trilogy – one lucky rider
will win a similar car when

Universal Studios' Back to the
Future ride closes on

POSTER boy: enticing the crowds to
the Back to the