NEVER TOO MANY COOKS HERE 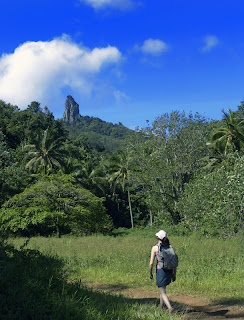 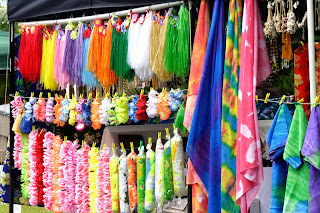 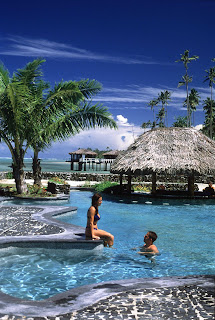 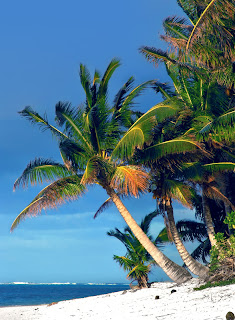 NEVER TOO MANY COOKS HERE

In the beginning, so legend tells us, there was Avaiki, the idyllic
heaven from whence the first adventurers set forth to inhabit the
islands that were to become the South Pacific.

And, say those same legends, in the case of the Cook Islands these
voyagers carried with them a unique spirit of serenity and tranquility
that became the beauty that has lasted in these islands to this today.

But just whether Avaiki lay on land, in sea or in the skies above,
legend does not say – suffice that life was not always heaven on earth
in these islands that laze in the sun just five hours or so to the
east of Auckland.

"We have a toast to our visitors," says a local, a grin as wide as the
pink and gold sunset that Cinemascopes the sky behind him. "Today, we
welcome you to sit at our table, because in days gone by we would
have welcomed you to be on our table!"

The London Mission Society first came to the islands in 1823, and
within 10 years the entire population had been converted from
cannibalism to Christianity; today there are eight denominations
amongst just 18,000 inhabitants.

And while tourists can visit an ancient marae where the chiefs once
held court and perhaps shudder a little at the sight of a crumbling
stone 'offering table,' today's extremely religious guides talk only
in offerings to the gods of fruits, coconuts and taro – not of the
human kind.

History passed down by word of mouth says that the first settlers
landed 'from Avaiki' around 800AD, and that in the 13th century Chief
Tangiia Nui from Tahiti and Chief Karika from Samoa joined forces to
capture the Cook Islands from these first Avaiki inhabitants.

Years later the itchy-footed Captain James Cook happened along, and
the island group was officially named after him, after he noted them
in his journal in 1773.

The tranquil Cooks don't get the big visitors numbers of some other
South Pacific destinations due to their remoteness, but visitors are
rewarded with a wonderfully laid-back environment in which the locals
welcome visitors much like long-lost relatives.

And the islands have plenty to amuse and occupy the holidaymaker – or
to lull those to whom the ideal South Pacific holiday is a late
breakfast, a good book, a hotel pool, a bountiful lunch, an afternoon
kip, a leisurely dinner with a glass or three or red or white, and
bed.

And rainbows of cocktails in-between, purely of course, to stave off
dehydration.

To get about you can hire motor scooters or rental cars, or take the
island bus for the 31km trip around Rarotonga, and a must-do is to
drop into the shops for unique colourful stamps and the rare black
pearl grown in the islands… and to dine on fish 'n chips at the
waterfront Trader Jack's.

Or to search for the unique Cooks Islands' $3 bills that are now
virtually out of circulation – due to the fact most have been snapped
up by tourists.

An interesting half-day tour is with 4WD Raro Safari Tours high into
the hinterland for spectacular views of the coast and lagoons. Their
driver/guides are a wealth of historical and cultural information: why
is there a church in every village, why do they bury their loved ones
next to their homes rather than in a public cemetery, what is this
magic cure-all called Nono, did Avaiki ever exist…?

And from high atop Arore Hill they'll show you the channel through
which seven great canoes set out on a voyage of exploration 700 years
ago that led them to discover New Zealand.…

For information about holidaying in the Cook Islands, see travel
agents, call Coral Seas Travel on 1800 641 803 or check-out
www.coralseas.com.au

. ESCAPISM – the Cook Islands' beaches are a place of serenity and

. RESORT to relaxation in settings like this at Coconuts Bach Resort.

. COLOURFUL markets entice the visitor to the Cook Islands to part
with a few spare dollars.

. PEACEFUL now, but folk once-feared what may be around the corner on
the Cook Islands Warriors Trail.