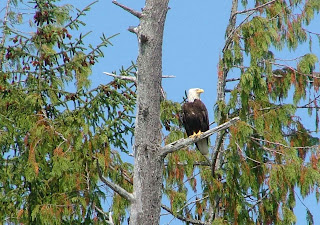 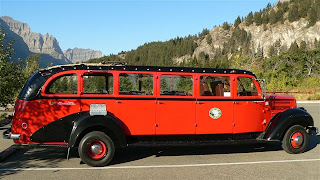 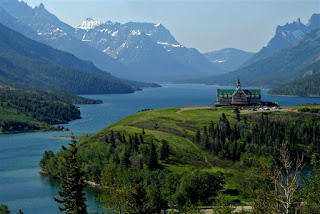 THE American railway magnate Louis Hill had a quick eye for a dollar,
and in the early 1900s he reasoned that there were some very quick
dollars to be had from those discovering the joys of the newly-founded
Waterton Lakes National Park in Alberta in the Canadian Rockies.

So to indulge their passion for hunting and fishing in this grand
wilderness, he decided to build them a grand hotel that would cater to
their every whim, coupled with a luxury rail service to get them
there.

His hotel, to be known as The Prince of Wales, would have 200 rooms
with breathtaking views and the sort of service that, whilst not out
in the field with binoculars, rod or gun, would encourage leisurely
hours wining and dining in an almost fairy-tale setting.

But although he first mooted his hotel in 1913, between his own
renowned indecisiveness and the Canadian bureaucracy, it was not until
the mid-1920s that he actually started building it.

And when he was nearly finished the long, low, 3-storied affair with
spectacular 360-degree views overlooking Waterton Lake and Village, Mr
Hill suddenly decided he didn't like the look of it. So he had half of
it pulled down, and a fresh start made.

Then after a business trip to Europe he ordered that the entire top
floor be taken off the hotel and the roof be re-built so his hotel
would look more like a Swiss Alpine chalet. He also increased the size
of rooms, but to do this had to reduce their number from 200 to just
eighty seven.

During all this, and wearing his hat as President of the Great
Northern Railroad, Mr Hill was also struggling with building a rail
line through the mountains to his hotel.

The Rockies, he found, were aptly named, with the rock
as-tough-as-nails granite that was almost impossible to dig through.
In the end, with new-fangled motor-cars capturing the interest of
wealthy Americans and roads fast snaking across the Rockies, Mr Hill
gave up on his rail line nearly fifty kilometres short of its target.

Instead he used mule teams to haul hundred of tonnes of construction
materials those final 50kms, including a massive steel-framed window
that had been prefabricated in England, and was 3-storeys-high and the
full width of the hotel's lobby.

The window is still a highlight of the hotel today, offering diners
and those relaxing in the hotel's lounge one of the Rockies' most
spectacular vistas.

Violent winds that howled off the lake twice blew the hotel askew, so
steel cables were buried in massive underground concrete blocks on one
side, run up through the walls, across the loft, and down the other
side into equally enormous concrete anchors. The hotel still sways
slightly in high winds today, but is certified safe against the
fiercest gales.

The ingenious Mr Hill also built a timber mill and carpentry shop at
Waterton village and bought local cedar that he made into furniture on
the spot, rather than hauling ready-made stuff hundreds of kilometres
by road and mule train; much of this furniture is still in use today,
eighty years after the hotel opened in 1927 at a cost of C$753,000.

The Prince of Wales was closed during much of the Great Depression,
and again during the Second World War. Today it's open from May to
early September each year – from October to April the population of
Waterton township on the lake below the hotel dwindles to around just
120 hardy locals seeing out winter.

Dining at the hotel is still as grand today as Mr Hill envisaged it,
with mouth-watering traditional British and Canadian fare, and English
Afternoon Tea from 2pm to 4pm daily that is much sought-out by
visitors to Waterton Lakes, whether they stay at the hotel or not.

The hotel even has its very own tea blended for this spectacular daily ritual.

The Prince of Wales Hotel is a good base for fishing, hiking,
horseback-riding, golf and scheduled lake cruising – or just sitting
and taking-in the views over Afternoon Tea – and is easily accessible
by road in summer months.

Canada & Alaska Specialist Holidays have packages to the Prince of
Wales Hotel, including air to Vancouver and self-drive to the hotel;
phone 1300 79 49 59.

Lake and Village amid Canada's Rockies.

HISTORIC Ford open-roof 'Jammer'
Buses are a novel way of

sightseeing National Parks in
the Rockies.

WILD – the area abounds with
wildlife, including

Bald Eagles that can be seen
from walking trails or

from boats on the Lake.