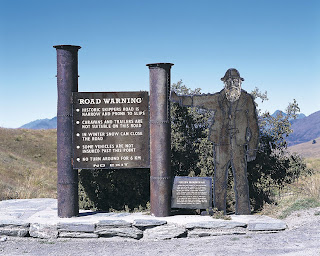 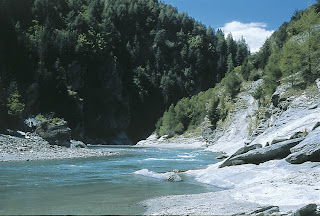 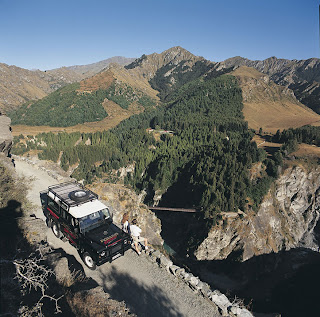 WHEN a couple of shearers named Thomas Arthur and Harry Redfern got
whisper of traces of gold being found outside Queenstown in New
Zealand's Southern Alps in 1862, they helped themselves to a frying
pan in their boss's kitchen, deserted his sheep station and took off
to the site of the find.

But they needn't have bothered with the frying pan: they clambered
further up the wild-running Shotover River than where the gold had
first been found, and rather than having to pan for tiny specks they
picked up nuggets by the handful, returning to Queenstown several
weeks later with pockets and packs laden with the precious metal.

Within weeks of their discovery, 12,000 hopefuls had flocked to the
area from all over New Zealand; ship's crews jumped vessel in coastal
Dunedin from where Queenstown drew its supplies to join the rush, and
even a Captain Duncan of a British cargo vessel telegraphed home that
as his entire crew had gone off in search of gold, he might as well
join them…

It was a good move: he made a fortune and the area was officially
named Skipper's Canyon.

By the time the Canyon's fields had been largely exhausted over the
next fifty years, they had given up more gold than Alaska's fabled
Yukon, although fossickers still make plenty of worthwhile finds to
this day.

But it did neither Thomas Arthur nor Harry Redfern much good: they
both died of alcoholism.

Accessing Skipper's Canyon was no easy task. Gold seekers wearing
heavy packs had to clamber through tortuous ravines with schist walls
that fell away from razor-back peaks at a near-vertical 75-degrees,
and follow hair-raising tracks worn by sheep through mountain passes…
one slip and it was a drop of several hundred metres to the river
below.

To get supplies in and out the government decided on an ambitious 32km
road that would zigzag through these ravines and the more rolling
sheep pastures, to slowly drop several hundred metres from Queenstown
to the level of the Shotover River.

The job took 200 men an incredible ten years, including a
white-knuckle section whose mere 300 metres that took two years to
carve around the almost vertical Pincher's Bluff.

To do this, men were lowered on ropes to drill into the schist, plug
dynamite into the holes – and then holler to their mates at the top to
haul them up quick-smart as they lit the fuses and watched the rock
blast away into the canyon below. They repeated this scary ordeal over
and again for twenty-four months.

Today the road is one of New Zealand's great tourist routes, with some
of the world's most spectacular alpine scenery. But it's not something
you take-on yourself – particularly as rental companies don't allow
hirers to take their vehicles into the Canyon.

Instead specialist Skipper's Canyon 4WD companies like Nomad Safaris
take visitors on four-hour excursions from Queenstown, their drivers
easing their 4WDs around the white-knuckle hairpin bends 100m or more
directly above the Shotover River, through the more open sheep
country, across an historic 1901 suspension bridge, and to the river
itself where there's time for a bit of gold panning.

There's also the remains of the Welcome Home Hotel that catered to the
original gold miners and continued trading for over 75 years to the
1940s.

Drivers also point out the tiny mountain cottage of John Balderstone
and his wife Fanny, a dancer who entertained the 1860's miners at
Skipper's pubs: John wanted to retire after the gold rush to the quiet
of the mountains, but Fanny liked the bright lights… so they struck a
compromise, and built their cottage exactly half-way between
Queenstown and Skipper's Canyon.

PHOTO CAPTIONS: WHITE-knuckle driving – on the road into Skipper's

Canyon, looking down from the
scarily narrow

WHERE it all began: the spot where
Thomas Arthur

and Harry Redfern "picked up gold
by the pound" and

START of Skipper's Canyon road,
and tribute to

Captain Duncan who jumped ship
with his crew to

make a fortune, and after whom the
Canyon is named.