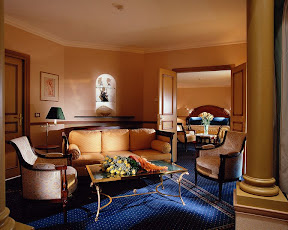 And for good measure, mentioning that your palace once starred in one of the big silver screen's biggest hits.

We're talking about the classic Sofitel Roma, a quiet haven of tranquility away from the frenetic main streets of Rome.

And yet while away from those main streets where it appears that traffic-wise, anything rules, the hotel is remarkably central: the famous Via Veneto shopping and dining boulevard (on which if you have to ask the price because its not in the window, it means you can't afford it,) is just two short blocks away, and the Spanish Steps an easy 10- to 15-minutes stroll – depending on your propensity for window shopping.

And a stone's throw away are the 80ha (148 acre) parklands of Villa Borghese, a one-time vineyard that in 1605 Cardinal Scipione Borghese turned into a park that's today complete with an artificial lake and an island with a small Ionic temple.

The Park was acquired by Rome City in 1903 and opened to the public, and is also home to several museums, an ampitheatre for concerts and a botanical garden.

The Sofitel Roma overlooks the Park from many of its rooms, and was originally built as a palace in the late 17th century by the noble family Ludovisi Boncompagni. If that's not enough to have your mates salivating, toss in for conversation that it was here that some of the scenes were shot for Federico Fellini's legendary 1960's classic la Dolce Vita.

The Boncompagni family sold out and in 1890 their palace was converted into a hotel, the Albergo Boston: by the 1930s and '40s it was the place to be seen in Rome, and gathering point for many Italian actors, film makers and writers who spent long hours ruminating over coffee and stronger stuff.

Sofitel completely renovated the hotel in 2000 in Roman Neo-classical style, putting in a marble lobby, mosaic floors in many of the hotel's public areas, large frescoes and huge statues, and completely refurbishing all rooms with a further quarry-load of marble.

Yet amazingly amongst all this, there's a bar that gives one the feeling they've been time-warped to rural England, something the hotel is very proud of.

There is much polished timber here, an adjoining almost-Cotswold library with porcelain hunting dogs with catch in mouth, a fire place and exposed timber ceiling beams, that all make for a delightful venue to enjoy drinks and light meals; there's also a separate lounge area.

And although it is boutique with just 109 rooms and four penthouse suites, the Sofitel Roma must have been an interior decorator's nightmare: no two rooms are the same size, and are a multiplicity of shapes – because when designed as a palace, rooms were created for the status of those who would occupy them… the noble Boncompagni family themselves, and the varying hierarchy of their more-than 100 butlers, maids, chefs, coachmen, grooms and general servants who bunked-up two or three to a room.

The hotel also has a vast rooftop terrace open to all guests until 10pm; many take drinks and room service meals here to enjoy the sunsets and million-dollar views of Rome's major landmarks.

For dining the Antico Boston Restaurant (in what were once the royal stables,) is open for breakfast, lunch and dinner, with lunch and dinner menus featuring Italian specialties.

Breakfasts are huge continental buffet affairs (included in the room price) with fruits, cereals, over a half dozen varieties of fresh-baked breads and rolls, eggs, cooked ham, cold meats, ham off the bone, cheeses, olives, muffins, cakes and pastries.

The Sofitel Roma is listed among The Historical Places of Italy; rooms start from around Euro-250 per night. See travel agents or check-out www.accorhotels.com

ROME skyline from a suite at the Sofitel Roma… you can almost stretch out and touch historic landmarks.

ONE of the hotel's four penthouse suites.