NO MYSTERY ABOUT ISLAND’S SPIRIT 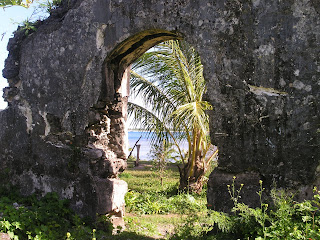 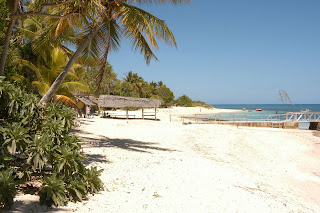 NO MYSTERY ABOUT ISLAND'S SPIRIT

IT'S got no electricity, no running water, no road, no telephones and
nobody even lives there, yet those who find themselves on this remote
South Pacific outpost have just voted it their "favourite port of
call."

But ask them when they return home from a cruising sojourn just where
on the map it was that took their hearts, most won't have a clue.

That's because to cartographers this touch of paradise is on their
maps as a tiny speck called Inyeug amidst the 80-odd islands that make
up Vanuatu – while to cruise companies it's on theirs as Mystery
Island.

And its history is as colourful as how Inyeug came to become known as
Mystery Island.

Go back over 160 years to when a South Seas trader and blackbirder,
Captain James Paddon found precious sandalwood trees, and strong
village men, on the island of Aneityum in the deep south of what is
now Vanuatu.

And coincidentally, at the same time a Canadian fire-and-brimstone
Presbyterian missionary, the Reverend John Geddie was coercing his
flock to finance a voyage to these very same far-flung islands to save
the souls of the heathens who lived there.

It was inevitable that when the blackbirder and the missionary
eventually confronted each other, fireworks would ensure. But such
encounters were brief and short-lived, as Paddon had already taken the
most precious sandalwood, shipped off the more able-bodied men of
Aneityum to work the bourgeoning sugarcane fields of Queensland, and
was planning on heading off himself to trade in greener pastures in
New Caledonia.

This left Aneityum to the Missionary Geddie to fiercely preach the
word of the Good Book and build the largest church for its time in the
South Pacific, a vast stone edifice with over 1000 seats for nearly a
third of Aneityum's entire population.

But while believing they were 'saving' the people of the island,
Geddie and his missionaries, as had Paddon and his workers earlier,
brought with them western diseases for which the isolated islanders
had no resistance, and within years Aneityum's population was
tragically decimated from nearly 4,000 to just 500.

And when he himself fell ill and died in Australia in 1872 while
seeking treatment there, Geddie's church succumbed to indifference and
an 1875 tsunami.

And interestingly Aneityum's little off-shore neighbour, Inyeug Island
continued to remain uninhabited: its owners eschewed Inyeug believing
it inhabited by spirits, so Paddon bought it for a song to build a
mansion there from which he would rule his South Seas empire, until
New Caledonia's riches looked more alluring.

Fast forward now to the 1980s when the migrant-ship-cum-cruise-liner
Fairstar began taking adventurous holidaying Australians into the
South Pacific. Her Captain, Luigi Nappa was captivated by little
Inyeug – just a mere kilometre long and half as wide – and often tried
to get his passengers ashore on what he could see was a spectacular
white sand beach.

But most attempts were thwarted by the unpredictable swell, with the
ship's cumbersome lifeboats unable to get safely through the surf to
the beach.

At the same time, Nappa and his PR man, the legendary Ron Connelly
were pondering "a more romantic, more South Pacific name" for Inyeug.

One day the irrepressible Connelly said: "Well, it's always on the
itinerary, but whether we actually get ashore there or not is always a
mystery – so why not call it Mystery Island?"

Nappa loved the idea, and so it's been to this day.

And with better facilities, P&O's Pacific Sun, Pacific Star and soon
Pacific Dawn, land passengers ashore for a day's swimming, walking
15-minutes around the uninhabited island, and buying shells, carvings,
necklaces and fresh fruits from the neighbouring Aneityum islanders
who paddle across in their canoes on 'ship days.'

If they've time passengers can also negotiate a canoe trip across to
Aneityum to see the remains of the Reverend Geddie's once-famous
church; a memorial on the site reads: When he landed in 1848 there
were no Christians here; when he left in 1872 there were no heathens.

(NEXT WEEK: We tell you how you can have Mystery Island all to
yourself for a truly Robinson Crusoe holiday.)

ALL that remains of once-biggest
church in the