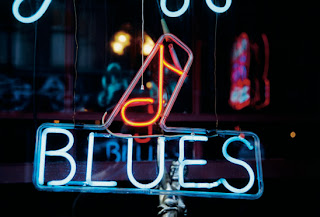 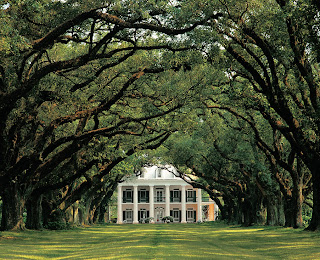 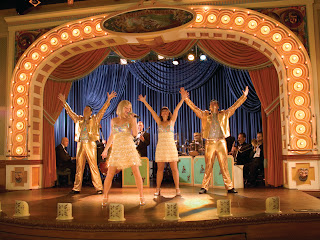 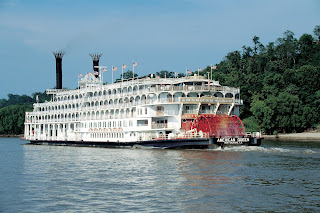 The inventive Nicholas Roosevelt reckoned there had to be better ways
of opening up the American inland than by staring at the rear-end of a
horse from a slow-rumbling buckboard, or even the new-fangled railway
he'd heard about but had yet to reach his hometown of Pittsburgh,
Pennsylvania.

And the Ohio River, that flowed past his very door to join the mighty
Mississippi and meander on to New Orleans and the Gulf of Mexico,
looked just the place to start.

But proving Old Man River could become a grand highway carrying crops
from the bourgeoning cotton farms and sugar plantations of the inland
to the coast, and bringing supplies and new settlers back on return
trips, turned out to be anything but plain-sailing.

It was 1811 and to start with the little wood-fired steamboat New
Orleans that Mr Roosevelt built with his mate Robert Fulton at a cost
of $40,000, caught fire just a few days into her pioneering journey
and was only saved by the quick action of her crew.

Then an earthquake created a tidal wave that caused the Mississippi to
flow backwards to the inland instead of to the sea, the resultant wild
maelstrom nearly sucking boat and crew under.

And if that wasn't enough they were attacked by Indians who thought
they were aliens who'd landed on their river – and no one mentioned
they'd have to run the Ohio Rapids that somehow weren't shown on their
charts.

To further add to all this confusion, Mrs Roosevelt went into labour
one night and gave birth to a son.

But after 28-days of such Boys Own adventures the brave little
side-wheeler steamed into New Orleans, proving Mr Roosevelt's point.
And within a few years dozens of ornate paddle- and stern-wheelers
were following his path, churning their way up and down the
Mississippi and her tributaries, linking New Orleans with such
emerging communities as Natchez, Pittsburgh, Minneapolis/St Paul and
Chattanooga.

Not short of a dollar himself – his family was well connected and he
was great grand-uncle to Theodore (Teddy) Roosevelt who was to became
America's 26th President – Nicholas Roosevelt went on to pioneer many
new riverboat routes with his little New Orleans (that sadly sank
after striking a sunken stump in 1813.)

And for over a century they provided the main means of transport in
the South, carrying everyone from blue-blood plantation owners and
their Southern belles, to conniving gamblers and manacled slaves,
until falling victim to trains, planes and automobiles.

But today the Mississippi riverboat industry is flourishing once more,
although this time their cargoes are holidaymakers taking to these
oft-dubbed "wedding cake boats" (because of their ornate
superstructures) to explore America's fabled South at leisure.

Aficionados call such adventures "steamboatin'" and it seems
Australians have never been keener to get a bit of the action,
particularly cruise buffs looking for options to the traditional
cruise offerings.

Drifting down the Mississippi at a leisurely 10 or 12 k's aboard a
faithful replica of these gracious vessels from the 1800s and early
1900s is something the riverboatin' faithful swear you'll never
forget: picture yourself sitting on deck in a rocker, or tucking into
traditional riverboat dishes of Southern fried chicken, pecan pie and
chocolate brownies, or enjoying Dixieland, jazz, Delta blues,
Southern-style cabaret and vaudeville.

It's an almost-blend of Disneyland and Huckleberry Finn that rekindles
memories of childhood black & white flicks and the stories mum and
dad used to read us… yet there's the reality of seeing Civil War
battlefields, and the contrasts of grand Southern mansions and the
bayous and little pioneer settler communities of the poor.

Canada & Alaska Specialist Holidays has 8-day/7-night riverboatin'
holidays from New Orleans to Natchez by way of Vicksburg with its
museum and Civil War sites, and Helena that's Arkansas' capital of
gospel and blues.

There's also a night each in Tunica and Memphis to pay homage to Elvis
Presley at his Graceland Mansion, and to visit the Rock & Soul Museum
that pays tribute to the life and times of the likes of Elvis, BB
King, Johnny Cash, Ike Turner, and Jerry Lee Lewis.

Prices start from $1995pp twin-share including all meals and nightly
entertainment by the high-steppin' onboard Southern Belles, with
longer cruises also available; air is extra. Phone 1300 79 49 59.

. BACK to the days of Huck Finn – yesteryear "wedding cake" American

. SOUTHERN comfort: grand Oak Alley Plantation on the banks of the

. BLUES – signs like this dot towns where music is king on the routes of