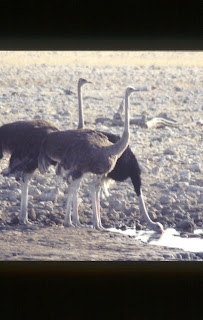 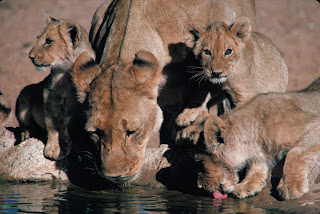 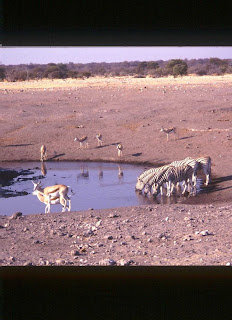 The great Namibian stand-off was close to breaking point.

The scene: At one of a limited number of waterholes shrunken by the
blazing southern African sun.

The players: A small herd of zebra and a pride of nine lions including
a couple of cubs at foot.

The status: The lions are closer to the waterhole than the zebra but
one obviously very thirsty zebra is edging closer to the life-saving
waterhole.

But more of that in a minute...

Of the scores of national parks in eastern and southern Africa that
are home to the Continent's amazing wildlife, Namibia's Etosha
National Park and the Kalahari National Park in neighbouring South
Africa are unique in their hot, arid, desert nature.

They are home to the elephants, lions, antelope and other wildlife
commonly found in other game parks like Kruger in South Africa and the
famed Masai Mara in Kenya, but the desert inhabitants have inherited
minor genetic differences that make them better equipped to exist in
the harsh habitat.

Previously known as South West Africa, Namibia has a chequered history
with involvement of the Portuguese, British and Germans before being
placed under the administrative control of South Africa by the League
of Nations after World War One.

An independent country now, Namibia has a 1400–kilometre coastline but
oddly its rainfall is minimal as the cold Benguela Current's water
temperature of about 10C is too cold to allow much evaporation.

This cold current meeting hot, dry winds causes fog to move over the
desert, sustaining life in an otherwise arid area and leaving only
about two per cent of the country's soil arable – but making for
extraordinarily spectacular scenery of desert moonscapes and deep
canyons.

Hence the stand-off at the Etosha waterhole is a commonly-played-out
drama in wildlife reserves throughout the country.

Unbeknown to our single courageous but parched zebra reaching the
waterhole was not as fraught with danger as his colleagues imagined.

Beside the pride of sluggish lions lazing in the shade was the carcase
of a full grown gemsbok on which the pride had gorged breakfast and
were now, at high noon, resting their swollen bellies in the shade and
not the least bit interested in zebra for lunch.

But it was great theatre for the group of tourists taking in the scene
from an open-topped Land Rover about 30 metres away and watching the
zebra one by one venture to the prized waterhole.

Such drama is enhanced by the proximity within which vehicles can
safely approach wildlife throughout southern Africa. The animals are
thoroughly accustomed to being approached by vehicles and have come to
regard them as no threat as they go about their daily habits of
feeding, fighting and mating.

The animals recognise and do not fear the profile of the vehicles.
However, if someone should stand up quickly and break the profile of
the vehicle or make sudden sharp noises or move quickly in brightly
coloured clothing whilst watching animals at close range (predators,
elephants and the feared Cape buffalo in particular,) an afternoon's
game-viewing has been know to turn sour as frightened animals react in
the only way they know – attack.

But there were no attacks at the Etosha waterhole that autumn day. One
by one the zebras gradually plucked up courage to edge past the lions,
although there were some skittish moments as the odd lion raised a
sleepy head to sight the passers-by. Another day it could have been so
different.

To join an Africa safari, specialist in holidays to the country, Bench
International has a choice of holiday packages in Namibia ranging from
four-days to Etosha (costing around $1055) that can be combined with
other arrangements in the region, to a 10-might Classic Namibia Safari
(costing from $4150) that includes Etosha, the capital Windhoek, the
German enclave of Swakopmund on the coast and the Namib Desert.

There are direct flights from Australia to Johannesburg for connection
to Windhoek. Details from Bench International, phone 1800-221-451 or
visit

PARCHED waterhole in Namibia, scene of the great African stand-off.

A LIONESS with cubs at a desert waterhole.