WARREN TAUGHT US TO CRUISE THROUGH LIFE 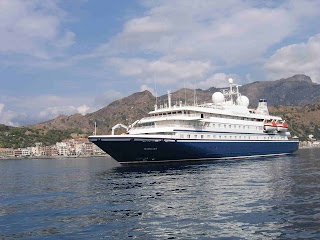 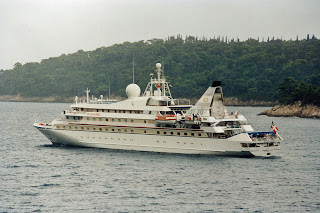 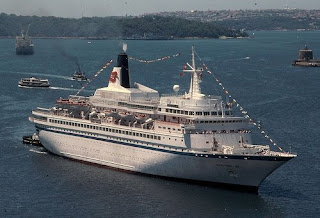 But for cruise-lovers it is Mr Titus – an ex-US Marine and one-time Hawaii cop – who almost single-handedly changed ocean travel from the pretty ordinary point-to-point sailing it was into the 1950s, to the luxurious and indulgent experience it is today.

Warren Titus breathed salt air from the moment he was born on the little island of Fidalgo in America's Washington State in 1915, and with a love of the sea from as early as he could remember, set his sights on joining the Marines – and surfing.

By his mid-teens he'd taken himself to Hawaii to indulge both passions, and after his discharge at the end of the Pacific War, to stay in Hawaii joined the Honolulu Police.

But the sea still called and he resigned, joined a local shipping company as a clerk, and jumped from there to another shipping firm, Theo H. Davies where he worked his way through the ranks to company President.

He was then tapped by P&O and offered the job of President of their growing organisation in North America.

Like most other passenger shipping companies in those days, P&O simply ran "line services" from one city or country to another, but Warren Titus said why not break these long journeys – such as the UK to Australia and through the Pacific Islands to Hawaii and America – into shorter voyages and market these as "holiday cruises?"

The idea clicked and soon he was giving such grand old liners as Himalaya, Chusan, Orsova, Orcades and Oronsay almost their own personalities as they began carrying fun-loving holidaymakers on short hops, rather than just largely-bored passengers from A to B.

And he started introducing a luxury lifestyle to cruising, quality entertainment programs, interesting dining, and more activities than just deck quoits and bingo.

Again he was tapped, this time in the early 1970s by a consortium of Scandinavian companies impressed with his ideas: they wanted him to create something even beyond how he was now dazzling cruise holiday-goers.

And so Royal Viking Line was formed, with Warren Titus its Founding President.

And he didn't disappoint: Royal Viking offered luxuries and indulgences unknown in the shipping world, with Titus overseeing every detail.

"He defined style and refinement," says Larry Pimentel, now President and CEO of Azamara Cruises, and who took over from Warren Titus as President of Seabourn Cruise Line after Titus had retired from Royal Viking and was asked to set up the boutique and even more-seriously luxury Seabourn.

"Warren set the tone, tradition and quality that guests were pampered with at Royal Viking and later Seabourn," says Pimentel. "He was the Louis Vuitton of passenger shipping in his day – Royal Viking was Royal because of Warren's Tiffany touch."

Titus changed cabins into staterooms, gave guests designer toiletries and full-size bathtubs rather than pokey changing-room shower cabinets, introduced single open-seat dining in place of "Early" and "Late" sittings, and changed the attitude of cruise-staff from one of "its just another job," to being proud of their profession.

And he forever exuded a gentlemanly charm and elegance, being described by industry colleagues as "always courtly."

But that didn't put him above picking up the phone to an irate travel agent or unhappy customer if something went seriously wrong. "If it was a really tough one, we'd say 'Let Warren do it,'" one ex-staffer recalls. "And Warren did it, with charm, style and effectiveness."

When Warren Titus eventually retired in 1987, he was immediately asked by Norwegian industrialist Atle Brynstad if he'd head-up an even newer concept Brynstad had in mind: Seabourn Cruise Lines that would sail small 212-passenger super-luxury boutique cruise liners – and later the even more-boutique 110-passenger SeaGoddess I and SeaGoddess II (still sailing today as SeaDream I and SeaDream II.)

It was an offer he couldn't refuse, and Titus stayed with Seabourn until finally retiring for good in 2002 at the age of 87.

The man his wife dubbed "The Ancient Mariner" and gave us cruising as we know it today, took his final Big Cruise To The Sky last month, aged 94.

So next time you're at the bar of your luxury cruise ship, raise your glass and tell whoever's listening that they're there for one reason: Because Warren did it.

[] ROYAL Viking Sky brought the first taste of ultra-luxury cruising to Australia when she visited Sydney in 1973.

[] SEA GODDESS as she is today: SeaDream Yacht Club's SeaDream I