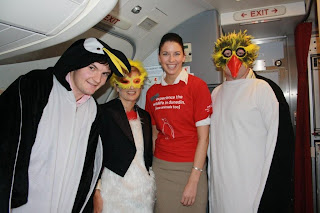 During the flight Guests raced chocolate Jaffas down the aisle of the Boeing 737-800 in honour of Dunedin's annual Jaffa race down the world's steepest street.  The real Jaffa race takes place each July as part of the Cadbury Chocolate Carnival.  This year 30,000 Jaffas were raced raising AU$75,000 towards Dunedin charities.  On the inaugural flight each Jaffa raced represented a different charity.  The winning charity, Children's Variety Club, will receive NZ$500 (AU$410) from Cadbury World who run daily tours of the chocolate factory.

Following an eventful flight, the aircraft was warmly welcomed into New Zealand by a flash mob of penguins at Dunedin airport.  Promoted through Facebook, the two best dressed 'penguins' in attendance won return flights for two on the inaugural Brisbane to Dunedin flight.

Tourism Dunedin Chief Executive, Hamish Saxton, said, "The inaugural flight, like Dunedin itself, was fun and quirky.  We are a lively city with a big heart and look forward to welcoming more Australians".

"The yellow eyed penguin can only be seen on New Zealand's lower south east coast and outer islands.  There are an estimated 4,000 yellow eyed penguins left in the world and Dunedin is one of few places you can see the species in their natural environment without putting their safety at risk," says Saxton.

From today Pacific Blue will operate the return Brisbane to Dunedin service three times per week on Tuesdays, Thursdays and Sundays.

Virgin Blue Group Chief Executive Brett Godfrey said the new route has shown a positive response in both sales and support by Aussies and Kiwis with the launch flights filled to capacity in both directions.

"Being the second-largest city in the South Island, this direct route provides a market opportunity to attract and satisfy both business and leisure Guests and if our initial and forward bookings are anything to go by this service is already proving very popular with travellers."

Pacific Blue will operate a B737-800 between Brisbane and Dunedin increasing capacity on the route by over 170% or 540 seats per week in each direction.

Pacific Blue's holiday program Blue Holidays offers 'all inclusive' deals to Dunedin including return airfares and two nights accommodation in a standard room at Mercure Hotel Dunedin starting from $507*pp from Brisbane or: