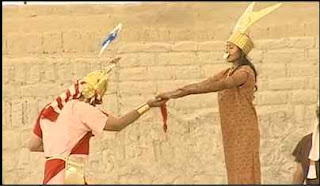 Buried in a country riddled with murder, mystery and a million years of intrigue, another mummy bites the dust.

A 2,000 year old mummy was found with legs bound by a cord in the foetal position, in the Northern Highlands of Peru a couple of weeks ago.

This new discovery by a team of Japanese archaeologists comes just after PromPeru’s announcement to hold media conferences and travel trade workshops about a ‘Super-Mummy’ – La Senora de Cao - another important find.

La Senora de Cao (the Lady of Cao) was the first known governess of Peru. A museum dedicated to her was opened in April of this year and is already drawing record numbers of tourists.

“Peru is a great destination for Indiana Jones type of travellers who want adventure and the opportunity to explore ancient civilizations.” she added.

Learn more about Peru’s fascinating mummies at the media conferences and travel trade workshops help by PromPeru, in Sydney and Melbourne late October.