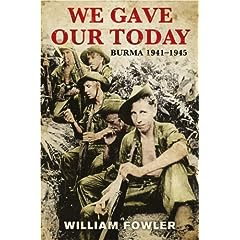 While often considered the ‘Forgotten War’ after the rapid domino collapse of Hong Kong, Malaya and Singapore, and the subsequent focus on Europe, Burma was riddled with epic surprise: the battle front stretched nearly 700 miles, secondly in length only to the Russian front, and the Allied assault crossing of the Irrawaddy in February 1945 was the widest ever in history encompassing 200 miles of bridgeheads.

Burma was where the myth of Japanese invincibility was finally turned around, resulting in the War’s longest campaign, starting in 1941 with the Japanese driving the British back up towards India before the amazing turnaround of General Slim’s 14th Army to completely rout the Japanese just before the atom bomb dropped. The Japanese left 13,500 dead around Kohima and Imphal alone in their largest defeats.

While Fowler writes with the strategic and tactical insight of a former soldier (he served in the 1990-91 Gulf War), the narrative sometimes bogs down like a jeep on the Burma Road during the ‘mango rain’ monsoons. But he admirably distils a complicated and protracted campaign involving the British, Americans, Indians, Chinese ‘and others’, plus the Japanese, down to its essence.

With colonial touchstones such as Rangoon, Mandalay, and the Irrawaddy River, We Gave Our Today is subconsciously imbued with the spirit of Kipling and his ilk, and one can’t help feeling maudlin for Burma’s dive-bombing trajectory ever since.

Stu Lloyd is a travel writer and author of The Missing Years. He also conducts military history tours of South-East Asia.
Posted by rodeime